Aeon Flixx and the Serendipitous Sewer 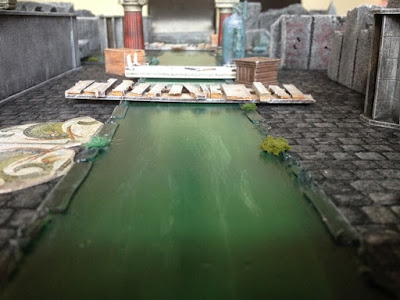 ‘Sawbones’ the apothecary covered his nose with the sleeve of his robe.

“That’s as maybe m’lady, but I prefer the cold, clear air of the surface to this stink. Must we lurk in the sewers?”

“You are new to this band sir, so I will make allowances, but it does not do to question the mistress’s orders!” Brunhilde, Aeon’s burly apprentice, growled.

Aeon smiled apologetically. “She’s very keen isn’t she? Now come along everyone, we have treasure to find!”

Time for another game of Frostgrave, continuing the ‘Into the Breeding Pits’ expansion with the ‘Here Comes the Flood’ scenario. 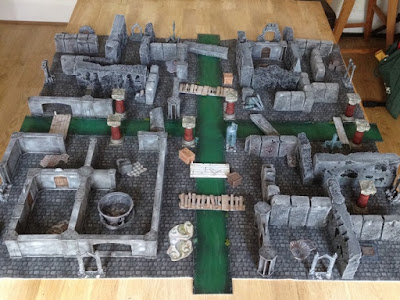 The table was set up as per instructions, with a canal splitting the board into quarters. A grand total of nine treasure tokens were placed on the table (three each, plus an extra one as per scenario and a revealed secret and fool’s gold from Giles’ Illusionist’s pre-game spells). 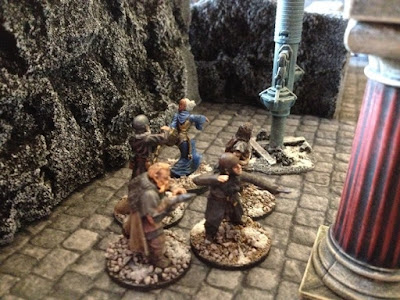 I split my warband, with Aeon Flixx leading one bunch. This time around she was accompanied with a newly-hired apothecary. Following the debacle last time I wanted a quick healing option if I needed to empower any spells. 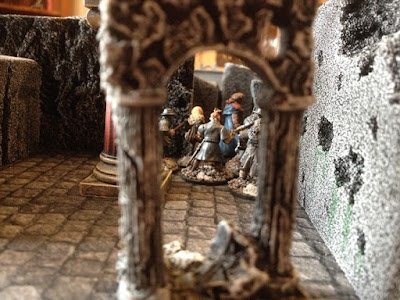 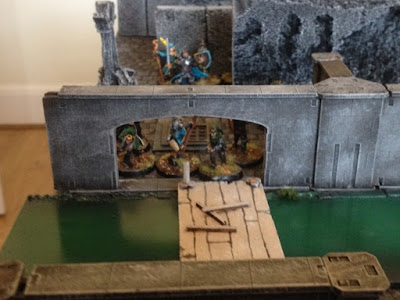 Giles’ Illusionist Shazam(!) led his warband on the opposite side of the table. Having rolled higher he got to choose his side of entry. I was somewhat dismayed to see that he had better routes to the treasure than me. 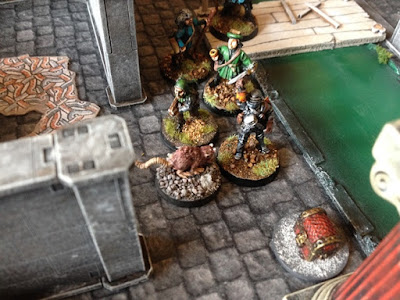 One piece of loot was duly picked up, triggering the arrival of a Vaphlorine. These demonic monkeys activate twice in one turn and, although placed out of sight as per the dungeon delving rules, quickly pounced on Shazam(!)’s men. 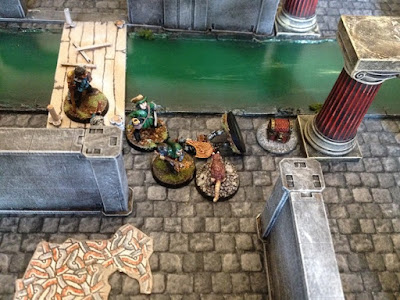 And so we rolled for the first combat of the game and I rolled a 20! Thus the Vaphlorine critted the rival treasure hunter, despite the support he was receiving from the rest of the warband. As he fell, a strange groaning sound could be heard in the distance, as if something was buckling under pressure… 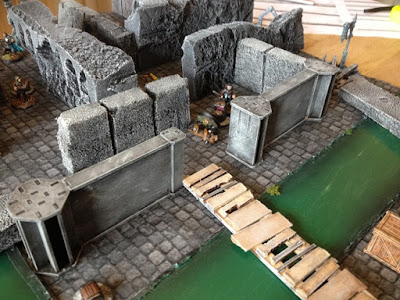 As the opposition headed for more treasure, Aeon was able to loose off an elemental bolt at their warhound, blasting it into yelping bits of fur. This was an early warning for Shazam(!)’s men to seek cover. 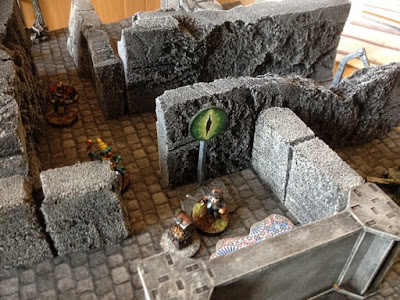 However even this might have not been enough, for the Chronomancer has a trick up her sleeve. Having originally cast Time Store the previous turn, she now cast Wizard Eye using her third action. However this was not enough to deter her rivals from picking up more treasure before ducking out of sight. 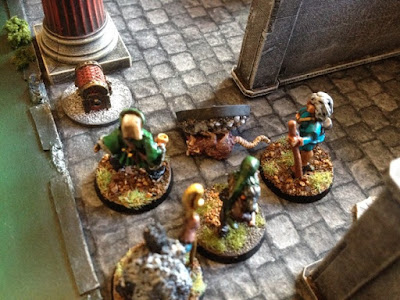 The Vaphlorine was eventually dispatched by the surviving members of the enemy group, enabling them to grab yet more treasure. So far I had only managed to get hold of a single treasure chest. More sounds filled the fetid air – the tortured creaking of a heavy door being slowly forced open. 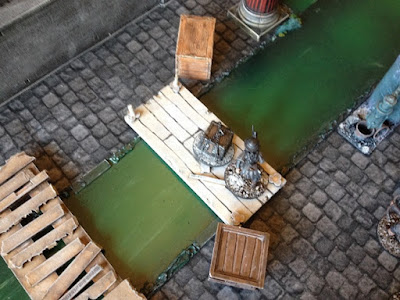 Not to worry though. One of Aeon’s thugs crossed a rickety bridge to claim the treasure lying neatly in the middle. Out of sight of the rival wizard’s warband, what could go wrong? 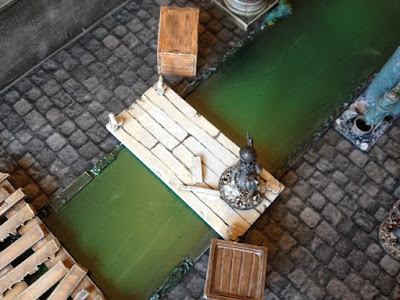 Pop! The treasure vanished! Shazam(!) chuckled as his fool’s gold spell frustrated Aeon’s men yet again. That left one piece of treasure within reach, but that was hidden in a room to my right, forcing my warband to move along the canal to get to the door. 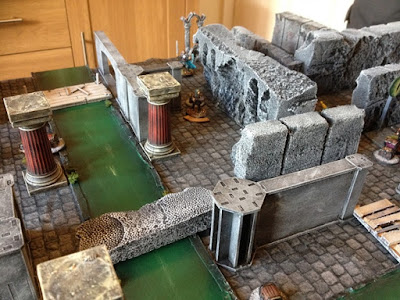 Meanwhile one of Aeon’s archers fired into the gloom, wounding an enemy thief. Would it be enough to slow him down enough to somehow steal the loot he was carrying? (Hint: no it wasn’t). It was nearly the end of turn 3 – soon we would have to roll to see if the distant gates would give way and flood the passages… 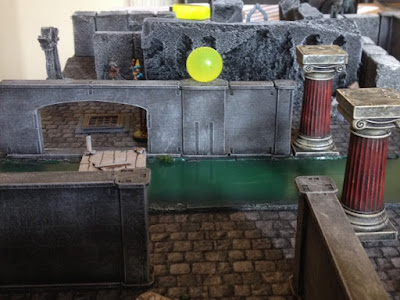 In order to dissuade anyone crossing the canal towards another piece of treasure, Aeon’s apprentice cast a Wizard Eye to cover the bridge and peer into the chamber where the treasure lay. (So far I’ve only made one Wizard eye marker so made do with a rubber ball balanced on the wall). 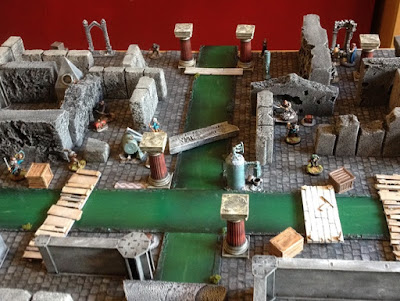 There was that sound again, followed by an almighty crash and a whooshing roar! Suddenly a deluge of filthy water rushed onto the board! But where would it come from? Giles rolled to decide the direction of the flow… His board edge! The wall of water forced Shazam’s warband towards Aeon’s side of the table, bashing them on the stone walls and in most cases forcing them to drop their treasure. Aeon’s team were also pushed back, but by a lesser amount, although the one treasure they had gathered was dropped and lost. 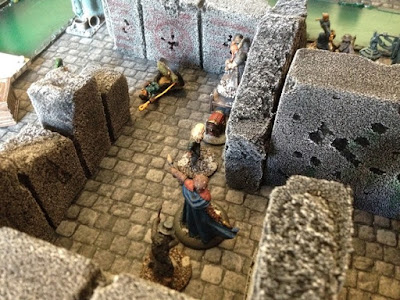 The drenched survivors picked themselves up and took stock, with the opposition finding themselves in the midst of Aeon’s treasure-hungry warriors. Shazam’s apprentice was surrounded by enemies. He dodged an arrow but succumbed to an Elemental Bolt from Brunhilde. 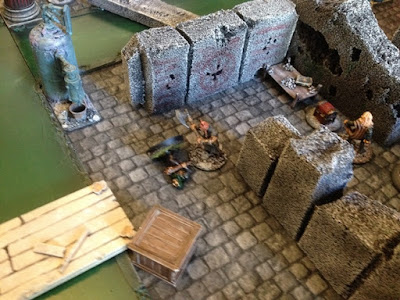 Meanwhile an infantryman recovered his wits in time to slay an enemy thief, while his fellow footpad, having lost his treasure, moved to pick up the chest that had virtually dropped at his feet. 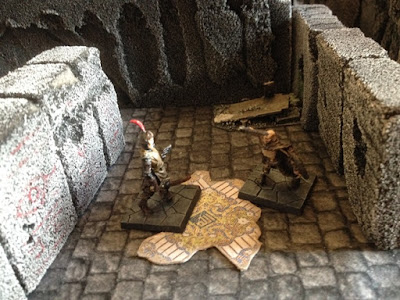 Also washed into the battlefield were two skeletons, which were now lurking somewhere near the enemy Illusionist (who had managed to stay on his feet reasonably well and was cut off from the majority of his soldiers). They posed little threat, but were enough to persuade the wizard to lie low. 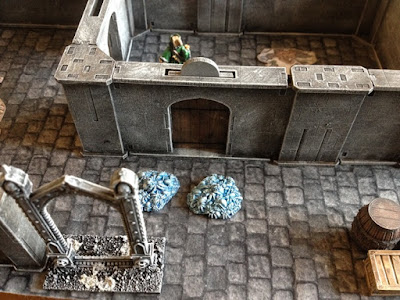 Another enemy that had stood his ground was a thief. He quickly made for a chamber and pilfered the treasure therein, attracting the attention of two chittering spider swarms (acting as proxy ice spiders). 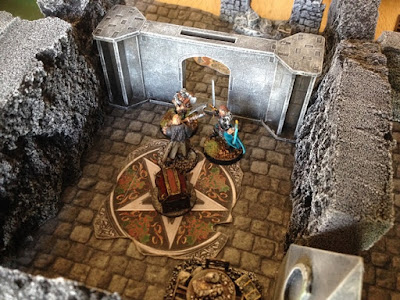 Meanwhile one of my infantrymen came round after the flood to find himself in the chamber to my right mentioned above. He picked up the chest, but quickly dropped it again and braced himself as the rival captain, accompanied by a thug, appeared at the only door out of the room. 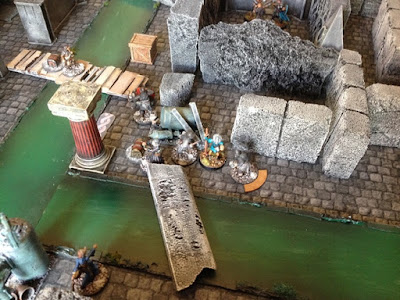 Aeon’s thugs pounced on the rival apothecary while their comrades raced past (enlivened by Fleet Feet spells from the Chronomancer, who directed proceedings on the other side of the canal) to collect more dropped treasure. 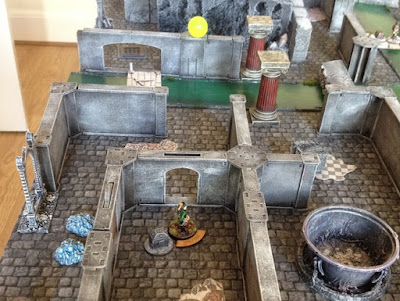 On the opposite side, the brave enemy thief was blasted by an Elemental Bolt courtesy of Brunhilde from her Wizard Eye. The fellow was wounded, and would only be able to leave the chamber either by advancing under the glare of the eye, or facing the ice spiders. 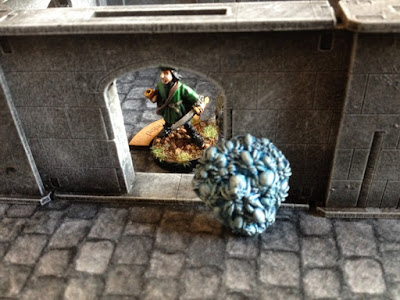 The footpad opted for the latter option and managed to dispatch both spider swarms, thus freeing himself to claim at least one more treasure for his master. 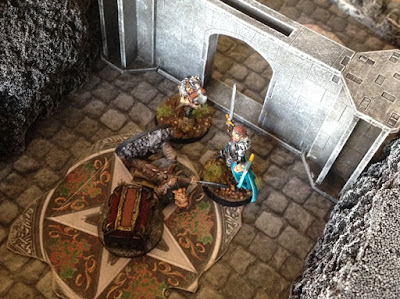 In the other sealed room, Aeon’s infantryman swung his axe against the captain, but being outnumbered was unable to prevail, thus giving up another treasure to the Illusionist. 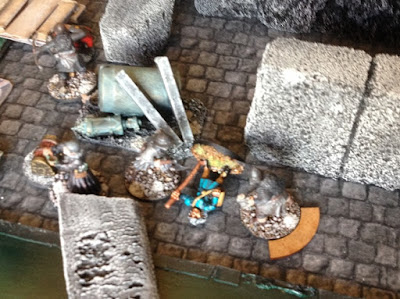 But the fight was soon swinging in the balance of the Chronomancer’s band, as the apothecary was dispatched by the thugs, despite managing to wound one of them. With Shazam’s surviving men withdrawing, it was now just a case of picking up the pieces. 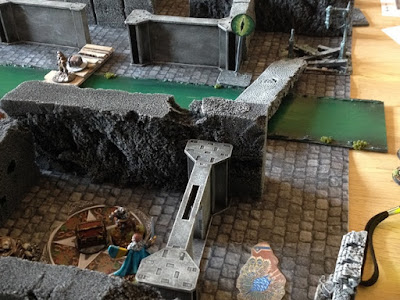 As our heroes tracked down the remaining chests of sodden treasure, Aeon tried for one last time to claim the one stolen by the enemy captain, hoping to zap him via another Wizard Eye as he exited the chamber. However the opposition got the next initiative, allowing the warrior to escape unharmed. And so, with all treasure claimed or lost, the wet and smelly warbands withdrew.

What started out as quite a frustrating game unexpectedly turned out to go very well for me. My early lack of success in grabbing treasures was offset when the lion’s share of the loot basically dropped in my lap at a single roll of the dice. 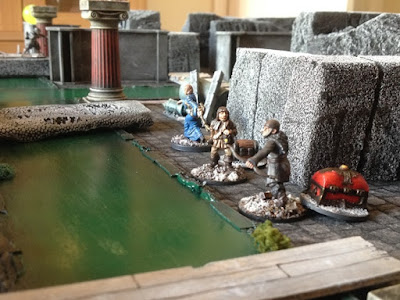 I can claim no tactical genius, although I was pleased how the combination of Time Store, Wizard Eye and Elemental Bolt worked. With four (rather lucrative) treasures to Giles’ three (and Giles having to spend all his loot on hiring a new apprentice), I won the game, but more by luck than by judgement!

Read Giles’ view of the game by clicking here.

Aeon Flixx sat in her study, the freezing air blowing in from every opened window in an attempt to clear the pungent sewer smell. Brunhilde, trying not to look too smug, hauled in another pile of loot in her powerful arms.

Something was bothering her… Maybe it was the chilly wind, or the distant cries and howls that it carried. Maybe it was the oddly synchronised ticking of the recently installed Enchanted Clock. Maybe it was simply the lot of the Chronomancer to feel echoes of the future…

She couldn’t put her finger on it, but something wasn’t right. Or, more accurately, something wouldn’t be right. Not right at all…
Posted by JP at 11:30