Aeon Flixx and the Lustful Leviathans 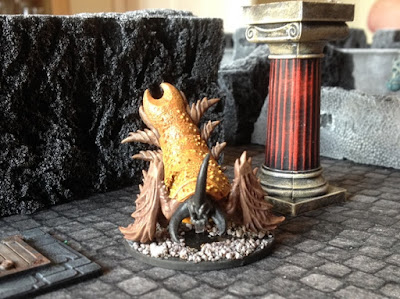 The creature grazed on the fungus that lined the walls of the cave as Aeon peered out of the tunnel mouth. She leaned forward a little to get a better look, but paused as it turned it’s large head towards her.

She stiffened, slowly reaching for her wand, but the beast simply grunted before turning back to it’s feed.

“I was right about the tracks,” she whispered to her apprentice, who squeezed into the tunnel behind her. “It’s a Devourer – very rare in this time period and extinct in mine.”

Her question was cut short as the Devourer shifted it’s bulk and began to burrow through the rock.

“C’mon!” urged the Chronomancer. “You don’t get to study a live Devourer every day – let’s follow it!”

After inadvertently triumphing in the last game, we had time to try out another ‘Breeding Pits’ scenario, and rolled the ‘Mating Season’. In this scenario the warbands track the huge, but normally docile Devourers. However, once these creatures meet during mating season, all hell breaks loose! 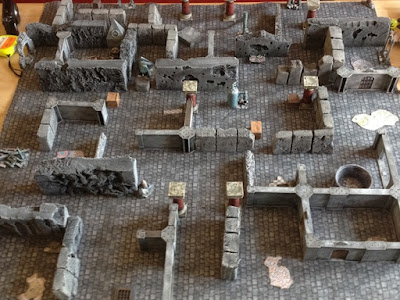 The table was set up and treasures placed as normal. I had the standard three tokens to put down, while Giles had managed a Fool’s Gold spell and placed four. 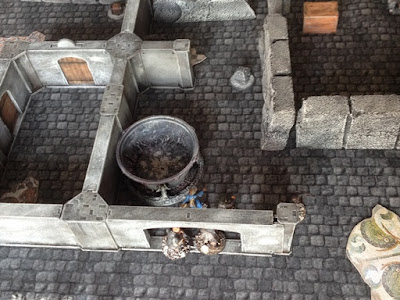 Once again I split my warband in two, with my wizard, the Chronomancer Aeon Flixx leading half of the team. Re-reading the rules after the game, I realised I’d been making a mistake here, as the dungeon exploration rules state that the warband must deploy 6” from one doorway, not two. 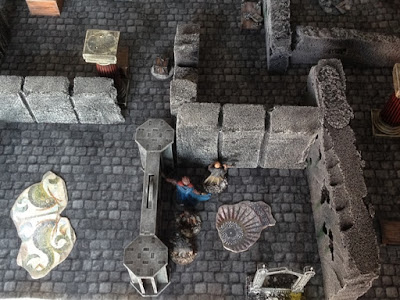 My mistake! Regardless, the other half of the warband deployed near the other doorway on my side of the table, led by my apprentice Brunhilde. Both spellcasters were confident following their previous encounter, which had netted them a nice pile of loot back at the inn. 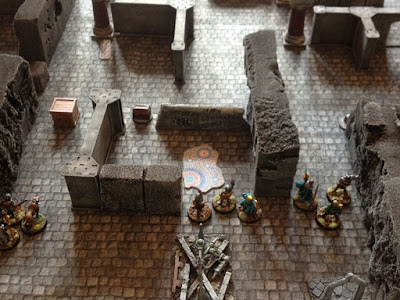 Opposite me, Giles’ illusionist Shazam deployed correctly from one doorway. After the previous game he had been forced to hire a new apprentice – the previous one having suffered a smashed jaw – and as such was somewhat embarrassed for funds. 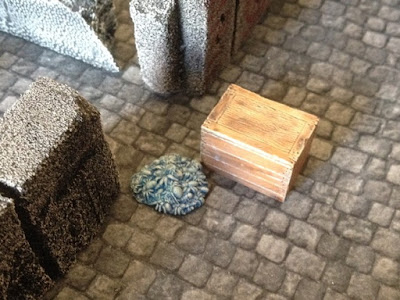 With worrying familiarity, the first treasure claimed brought forth a wandering creature – in this case an ice spider (once again using a swarm model as a proxy. I do have single models but this was the first one that came to hand!) 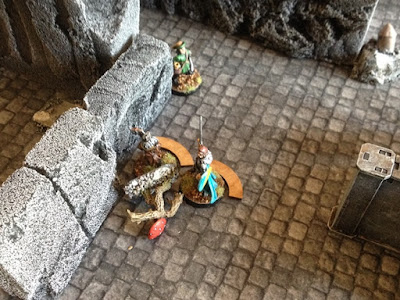 Soon another treasure was grabbed, which spawned another creature! This time it was a violent fungus, which quickly wandered into the path of Shazam’s captain and his companion. The soldiers easily slew the toadstool, but were both infected by it’s spores, reducing them down to a single action apiece. 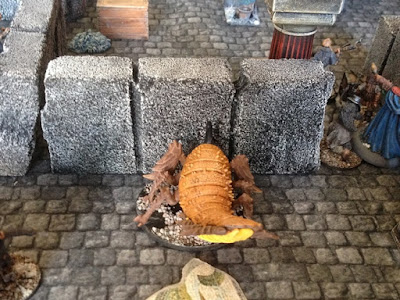 It was the end of the first creature phase, and as the scenario dictated a Devourer lumbered onto the board on each player entry side. They slowly began to burrow towards each other, ignoring the warbands that manoeuvred around them. 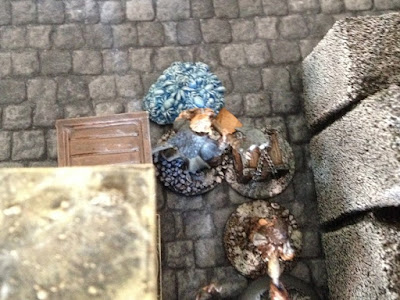 Aeon’s band headed for another treasure, but was stymied by the ice spider swarm. One of the infantrymen stepped forward to splat the bugs, only to find himself on the receiving end of a poisonous bite. He too was now reduced to a single action. 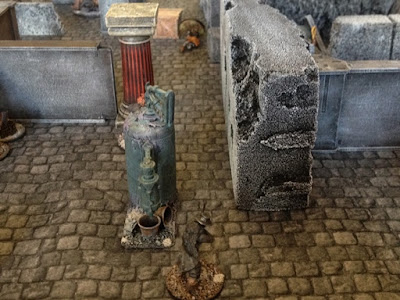 With the giant Devourers in their midst, neither side felt the need to complicate matters further by attacking each other as they probed the centre of the board, but that didn’t stop one of my archers from dropping one of the opposition. 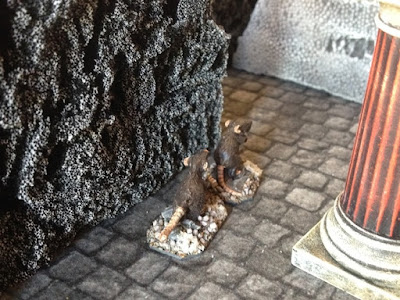 More treasure was claimed, which attracted a pair of giant rats. These puny creatures spawned out of sight on my right flank and wandered randomly away from the action. I paid them no heed, for it was unlikely that they would affect the proceedings in any meaningful way. 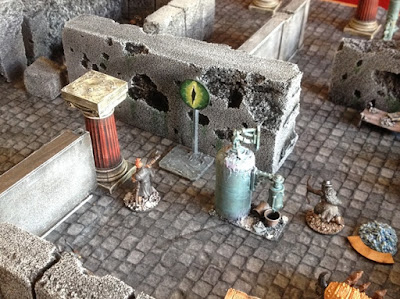 While one infantryman still battled the spider swarm, another pushed forward, covered by an archer and a Wizard Eye. With both wizards lying low, this was a rare attempt by Aeon to cast aggressively, as most of the time she and Brunhilde contented themselves with casting Fleet Feet on nearby comrades (the effects of which I promptly forgot about). 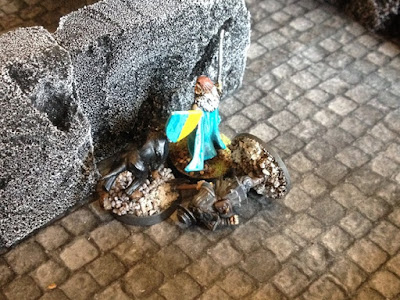 Hoping to take advantage of the enemy captain’s infected state, a thug and warhound made their way along my left flank to attack him. However he had been quickly healed by Shazam, who had found a wand of healing during the previous game. Back at full capacity, the warrior knocked out my thug. 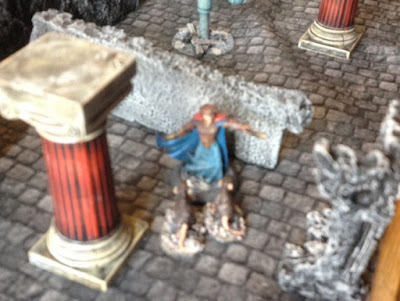 By now the two Devourers were almost within sight of each other and would soon turn aggressive as they fought for dominance. Not wishing to get caught in the melee, Aeon’s warband began to back away. Brunhilde the apprentice ducked behind a wall on the right flank…right into the path of the two giant rats I had forgotten about… (Note: this picture has been blurred due to it’s graphic content). 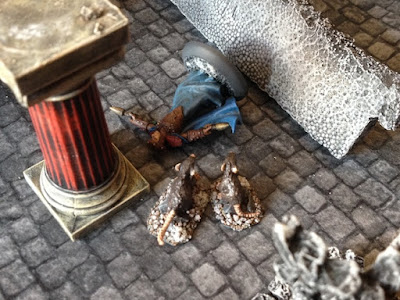 The rats pounced! Brunhilde went down! This was my own stupid fault for forgetting about the rats and moving my apprentice within line of sight of them. As a starting level apprentice, Brunhilde was hardly a fighting machine, especially against pack animals that activated together. Oh bugger… 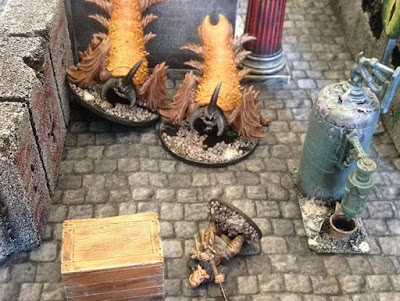 To make matters worse, the Devourers finally reared up against each other, turning from docile giants into huge killing machines. My still-poisoned infantryman, having eventually dispatched the spiders, had been sent forward as a forlorn hope, thus allowing everyone else to get out of the way. Two gobbets of acid spit later and he was a screaming mess on the floor. 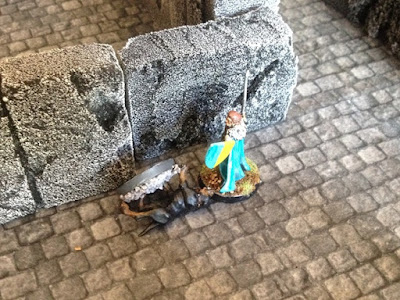 Most of the soldiers of both warbands were now hightailing it out of the arena with whatever treasure they could carry, but my warhound was still locked in combat with the captain. Alas, no lucky 20’s this time. 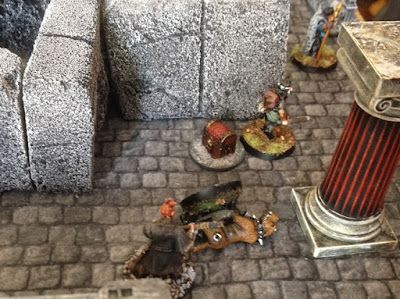 The discovery of a secret passage led to one last chance to get the better of Shazam, as my surviving infantryman stepped through a wall to engage his retreating treasure carriers. He managed to defeat the warhound rearguard, but was not fast enough to catch up with the rest of them.

The game ended up honours even treasure-wise (which perhaps reflected the cautious play of both combatants), but alas Brunhilde did not survive the post-injury roll, thus balancing out the result of the previous game. Luckily I was able to sell enough loot to hire a new apprentice, and replace the wounded infantryman to boot.

Aeon Flixx watched as the Brunhilde’s corpse was hauled onto the cart. So this is what her premonition, or perhaps future memory, was about.

She wiped her tears, telling herself that her apprentice knew the risks when she’d volunteered to join her expedition, but it did little to make her feel better.

Sighing, she carefully placed the last scroll into the sack of loot and handed it to one of the soldiers. “Take this to the Sisterhood as recompense for the loss of their acolyte. Pass my respects to the Mother Synchronous along with my request for another apprentice.”

She watched as the cart slowly disappeared out of sight and was about to return to the inn when one of the scouts suddenly raised the alarm. Squinting through the snow she saw a figure staggering towards the inn. Fishing out her wand, she and her two thugs cautiously advanced, their pace quickening as the stranger collapsed to the ground.
Posted by JP at 13:27