An Eye for the Ladies 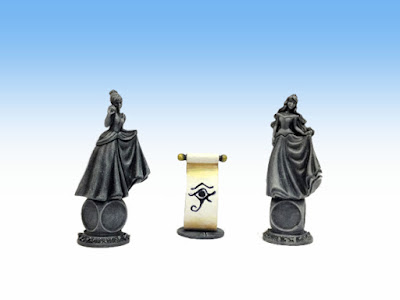 Once upon a time there were two beautiful princesses. This royal pair of siblings did what all good princesses do in stories that begin with ‘once upon a time’: they sang songs about love and suchlike, held elegant balls full of handsome princes, befriended small woodland creatures and generally acted prettily.

Of course what the stories that begin with ‘once upon a time’ don’t tell you is what happens to the third, less attractive sister the pair kept locked up in a miserable basement of their pretty princesses’ castle.

For deep down in this elegant, multi-turreted edifice, poor Lumperalla spent her days cleaning, dusting and battling through the grimy piles of washing-up that the pretty castle, with it’s pretty princesses and endless balls, generated on a daily basis.

To make sure that Lumperella worked every second of every day, the pair, being rather adept at magic, cast a wizard eye spell in the basement. They made it perfectly clear that, should the poor girl ever stint, rest or otherwise pause in her toil, they would cast a petrify spell via this eye and turn the unfortunate creature into stone.

Naturally, after a suitable period of time, when Lumperella had suffered the requisite amount of torment as dictated by stories that begin with ‘once upon a time’, her fairy godmother intervened and gifted her with the knowledge of a certain reaction spell.

The princesses first noticed something was amiss when the supply of clean crockery began to dry up. Looking through their wizard eye, they saw Lumperella sitting on a comfy chair, helping herself to the castle’s port and puffing on a large cigar. Enraged, they immediately cast a petrify spell and sent it hurtling down the visual conduit.

As the magic screamed towards her, Lumperella deftly weaved her reaction spell and deflected the blast straight back through the eye, turning the miserable sisters into stone statues. It is said that their chipped, battered and not at all pretty forms can still be found in the remains of the once-elegant castle, somewhere deep in the frozen city – side by side in front of a battered scroll, upon which a faded wizard eye spell can be barely discerned.

And Lumperella? Upon being freed from her incarceration she became the most formidable wizard of the age and laid waste to vast swathes of the civilised world.

It just goes to show doesn’t it? Never trust stories that begin with ‘once upon a time’… 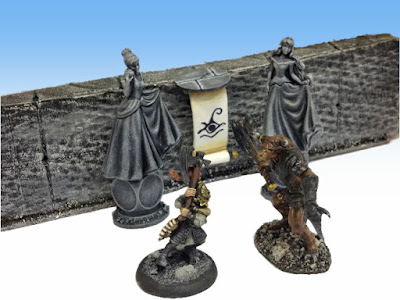 The summer holidays continue to take up what little free time I have, but taking advantage of a summer sort-out I did manage to rescue some old toys from the bin, including two Disney princess figures and a plastic scroll. The princesses were glued onto plinths (okay, tops from Capri Sun orange pouches) whilst the scroll was simply stuck to a base.

The former will serve nicely as extra statues whilst the latter will serve as a wizard eye marker (and as such I also painted the underside of the base so that it can hang off walls too).
Posted by JP at 13:59 No comments: