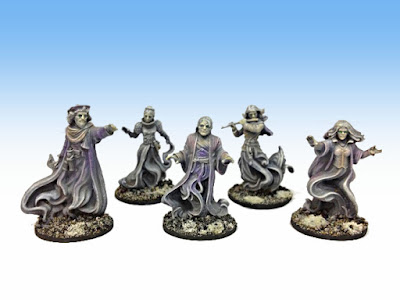 As intruders steal into the prestigious Collegium of Artistry, it’s headmaster Malcor summons forth the spirits of long-dead teachers from the great staff room in the sky.

Soon the shades of these mighty wizards, each the foremost proponents of their fields of lesser-known magic, sally forth to defend their school from those who would loot it’s treasures…

I’ve sat upon these figures for ages, simply because I had no idea how I was going to paint them!

The ‘official’ paintjobs on the Northstar website has them fading from a normal-looking top half, into their wispy grey bottom half. However I wasn’t sure I could pull off the blending and wanted to do something different anyway. 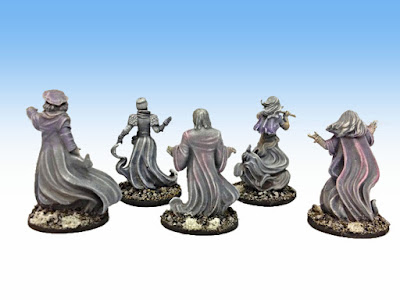 After much deliberation and discussion with my mate Andy, I decided to start off with a ghostly pale grey base colour (they are shades after all), through which bleeds the colours they would have worn when alive (If you’ve seen the Doctor Who episode ‘Under the Lake’ you might have some idea of what I’m getting at). Cue lots of drybrushing.

I’m not sure if I’ve managed to pull this off – perhaps the colouring is too subtle for the tabletop, making them look more like statues – but if I don’t consider them finished now, they’ll be back in the painting queue for ages! I’ll refine the technique for the next batch of figures… 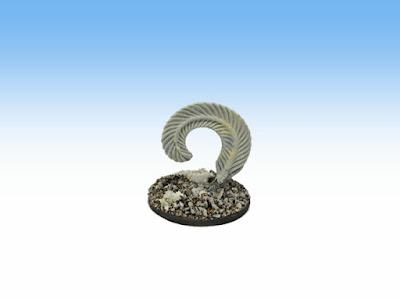 Oh, while I was at it, I found this feather in amongst some old Playmobil stuff that was being thrown away. I thought it'd make a nice 'furious quill' spell marker.
Posted by JP at 09:14 14 comments: