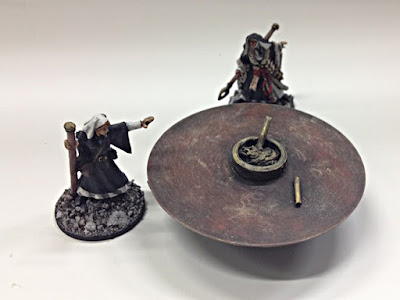 Continuing in my attempt to get myself back into the modelling groove, I’ve cobbled together some more easy-build scenery in the form of these tables. 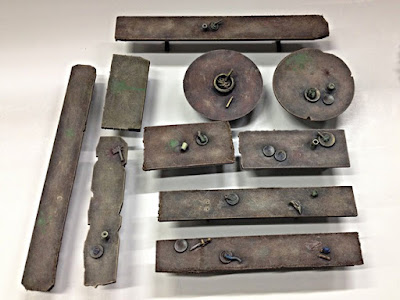 The second scenario in the Maze of Malcor expansion is set in a huge feasting hall and calls for three ‘long dining tables’. The scenario doesn’t specify how long, so that gives me plenty of scope. 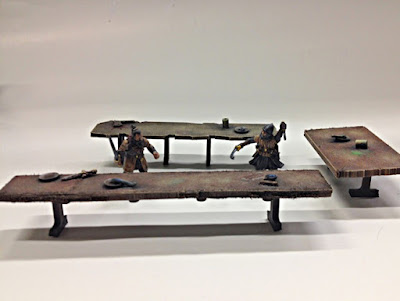 The tables are simply offcuts of MDF or plastic disks with either bits of plastic sprue or more MDF off-cuts for the table legs. In retrospect the longer tables may be too narrow, but I went with what off-cuts I had lying around, so hey-ho. 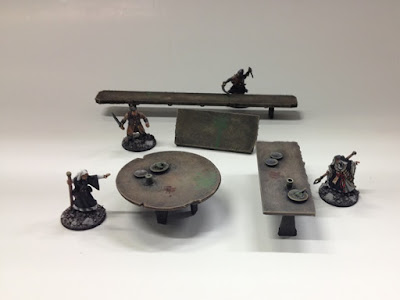 The tables were lightly sprinkled with pieces of rubbish and stuff from the bits box to make them look ‘well-used’. The plates were largely neutered drawing pins and the cups were snippets of cable insulation. Not bad for a few hours work!
Posted by JP at 11:27 No comments: 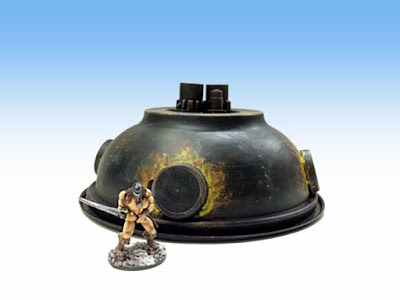 It was not for treasure that Gog the Mighty; Stalker of the Frozen Waste;, cleaved his way through the great Collegium of Artistry. Neither was it for glory, nor fame, nor the need to best himself against the rumoured phantom of the sinister Malcor.

No, it was none of these, for Gog the Mighty; Slayer of Frost Giants; sought only one thing…

Wiping the ichor off his greatsword, he stepped over the corpse of the giant insect and pushed open the great iron doors that stood between him and his goal. Bare torso glistening, he stepped warily through the doorway and smiled as he beheld the great black thing squatting in the middle of the huge chamber. 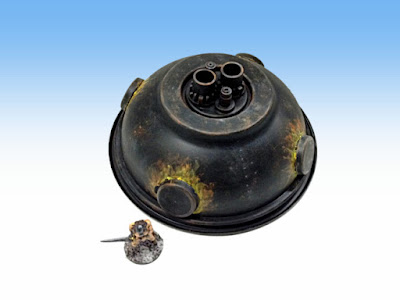 Dark hulking shapes moved slowly around it, but a barbarian warrior such as Gog the Mighty; Hunter of Snow Leopards; made short work of those. Soon he was facing the thing itself, with it’s smoke-stained pipes, blackened chimneys and fire-rimmed circular hatches.

His smile growing wider, he turned his near-naked body so that his loincloth-clad rear was as close to the intense heat that emanated from the thing as he dared.

No, it wasn’t treasure, glory or fame that Gog the Mighty; Crusher of Ice Demon; sought… it was warmth. 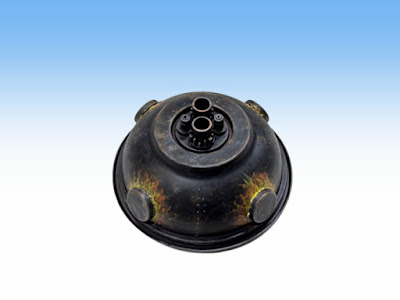 In an effort to get myself back into the groove again, I’ve made a start on some scenery for the Maze of Malcor expansion – namely the furnace from the eponymous fourth scenario in the book.

This scenario calls for a giant furnace room, in the middle of which stands said furnace: a 6” square model with a hatch on each side (wherein the Coalmen constructs will try to drag the unwary).

As luck would have it, I had a plastic bowl from a recent takeaway which was exactly 6” in diameter. I glued some old paint pot lids for the hatches and stuck some bits on top for chimneys. I also poked the inside of the bowl with a compass point to make rivets.

A quick going over with some black primer and an indifferent paintjob in an attempt to make it look hot produced this model. It’s a simple build for a one-off piece that’s only needed for a single scenario, so it’ll do. 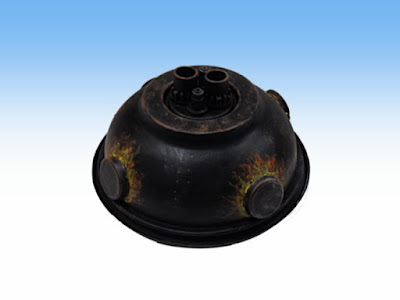 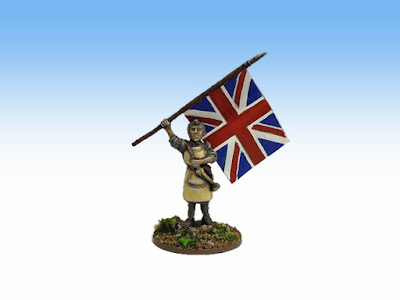 I'm starting the new year not with a Frostgrave mini, but something for my Very British Civil War collection.

(As I mentioned in my pre-Xmas post, my VBCW blog went kaput, when Photobucket tried to screw me over.)

A while ago I approached Mark 'TinShedGamer' Fuller, who I knew was sculpting some character figures for 1st Corps' interwar 'Twentieth Century Follies' range.

I told him the story of my Nan, who got into trouble during WW2. You see my Grandad was in the local Home Guard, and Nan would habitually welcome his unit back from manoeuvres by playing 'Come to the Cookhouse Door Boys', full blast on my uncle's Boys' Brigade bugle. This became something of an annoyance and eventually she was told firmly to stop!

And thus, after supplying him with some reference photos, the following standard bearer mini was born, complete with bugle!

Thanks Mark, and Happy New Year everyone!
Posted by JP at 00:00 No comments: