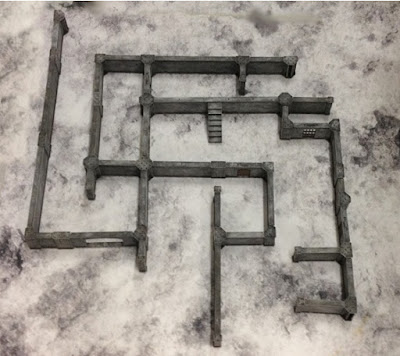 Ezekria the Beastcrafter’s tail swished in agitation against brand-new stonework as she brandished the parchment in a clawed hand.

The scruffy gnome before her stuck his thumbs into his tool belt and rocked on his heels with exaggerated nonchalance, his spectacles glinting in the torchlight.

Ezekria blinked in surprise – normally her bestial aspect was enough to unsettle the most powerful denizens of Felstad, let alone a lowly builder.

“Er, I mean this invoicce!” she hissed, recovering her composure. “It is ssignificantly more than what wass agreed!”

“Ah, well buildin’ a dungeon’s a tricky fing to estimate innit? The cost of stone’s gone way up since they started buildin’ that big tower topside – supply an’ demand see?” replied the gnome, hissing air through his teeth. “Then there’s the extra constructs I ‘ad to get animated to burrow through that granite outcrop, an’ wot about that Ampliphede nest – had to sub-contract out for pest control for that…”

Ezekria growled as the builder counted off a litany of other ‘extras’ on his fingers.

“…and’ those portcullises ‘ad to be up to spec – that’s proper enchanted iron that is, none of your cheap-“

“Yess enough!” she spat. “Very well, I will pay you what you assk on the undersstanding that thiss breeding pit will be ready in time for the gladiatorial sseasson.”

“Oh yeah, no problem on that score… give or take…”

Ezekria’s eyes narrowed. “Give or take what…?”

“Well, this soothsayer mate o’ mine reckons there’s this big blizzard coming see – might put a spanner in the works a bit…”

In readiness for any future underground adventures in the frozen city, I bought this very nice half dungeon set from Gaz at Figurebitz. 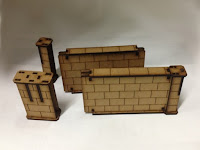 A box of laser cut MDF bits duly arrived, with each different element (from straight wall sections and end caps to T-section connectors and doorways) bagged and labelled. Gaz had messaged me with the instructions for each element and, with the help of some PVA and despite my cack-handedness, each bit went together very easily.

Being short on primer spray I decided to paint the bits with black craft paint first, allowing some of the MDF to show through for a bit of colour variation. It was then a case of drybrushing with my usual triumvirate of grey-ish tester pots.

Most of the elements slot in together very well and it didn’t take me long to build a reasonable dungeon layout. The half dungeon pack fills about ¾ on a 3’x3’ mat, so a full pack would give you plenty of options! Not sure it looks that effective on my gaming mat – may have to get a grey flagstone style one, more suited to dungeoneering.

A Hive of Industry 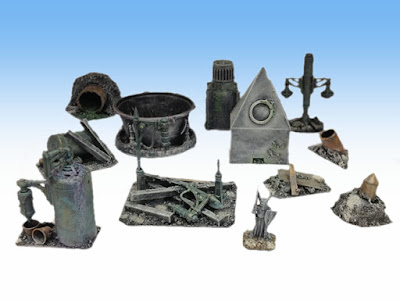 A number of Frostgrave scenarios are set in one sort of abandoned factory or other (for example in the Hunt for the Golem, Sellsword and indeed the whole Dark Alchemy expansion), so I thought I’d knock up some weird, magical industrial-ish scatter – smashed equipment, empty vats and broken machines the purpose of which has long since been forgotten. 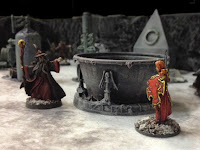 I had the idea after mulling over the bits and bobs I had left over from my re-purposed Warhammer 40K ruins – lamps, beams and other embellishments that looked a bit too sci-fi for Frostgrave. To these I added various bits and off-cuts and rifled the bin for empty paint pots and other bits of rubbish.

Mix them all up with some glue, flock and paint and there you have it! I’m particularly pleased with the large vat (an old sauce tub from a recent Chinese takeaway, supported by 40K bits) and the way the tarnished brass paint effect has come out. Not a bad few hours work! 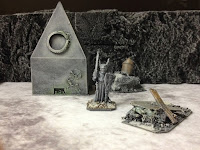 This is one of those posts where you link to somebody else's corner of the interweb in the hope of increasing your chances of winning a competition.

In this case it's Luke's Affordable Paint Service! Luke has a fantastic Youtube channel, which is jam packed full of terrain building, painting and general modelling hints and tips for the wagamer on a budget.


I've been a subscriber to his channel almost from the start, and even if he wasn't doing a 2000 subscribers giveaway, I'd still recommend you take a ganders at his vids!
Posted by JP at 16:11 No comments: