The Frozen Thieves – A Scenario 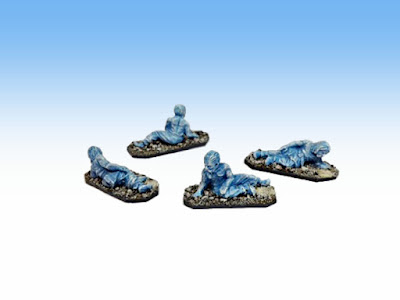 Having a few Celtic casualty figures left over, I hit upon the idea of painting some as some frozen statues. This in turn got me thinking up a scenario…

Back in days of yore, the fearsome Ice Dragon made it’s lair on the outskirts of Felstad and brooded over it’s vast hoard of magical treasures.
Many a foolish thief would try to pilfer the Ice Dragon’s trinkets as the beast lay seemingly asleep, but, as they stole back into the city to hide their loot, a shadow would envelop them as the dragon descended upon it’s prey.
Such unfortunates would be blasted by it’s icy breath, turning the cowering thieves into frozen statues. It is said that while the Ice Dragon is long dead, these statues remain to this day and, more importantly, so does the treasure they so hurriedly discarded.

The table represents the last hiding place of a group of thieves as they were set upon, centuries ago, by the Ice Dragon. Set up the table as per a standard game of Frostgrave.
Each player should place one treasure token and two figures representing frozen statues, as per standard treasure placement rules. Deploy warbands as normal.

The frozen statues represent thieves that have been frozen by the Ice Dragon. Although frozen solid, spellcasters may be able to thaw them out enough to learn where they have hidden their hurriedly hidden booty.
To do so, the spellcaster must be in base to base contact with the statue and use an action to successfully cast any spell in his/her repertoire by rolling a casting roll of 10 or higher (i.e. a spell that requires a 10 or more to cast, or a spell with a lower casting value that is empowered to 10 or more).
If the spell is cast, the magical energy will partly awaken the frozen form. Consult the table below.
The frozen statues will only reveal one item of treasure, but may have multiple spells cast on them until they are completely thawed out.

Any treasure revealed by the frozen thieves is treated as normal.

Experience is calculated as normal, but with the following additions:- 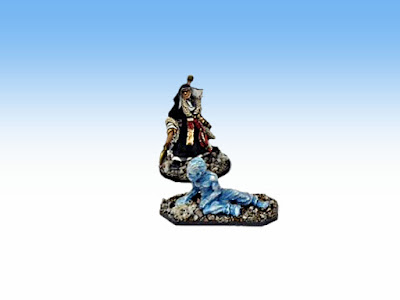 
You may introduce the Ice Dragon into this scenario. See Spellcaster magazine issue 2 for rules on using dragons.
For each spell that reveals a treasure, make a note of the number rolled (including modifiers, empowerment etc.).
When that treasure is picked up, roll for wandering monsters as usual. However, if a creature is spawned and if either of the rolls on the monster table matches the noted spell casting roll, place the Ice Dragon on a random corner of the board.
Treat the Ice Dragon as an ‘adult dragon’ with the spit poison trait (this represents it’s icy breath, which has weakened during the intervening centuries).
The Ice Dragon activates in the next creature phase.
As per the dragon rules, spellcasters gains +50 experience if their warband slays the dragon. 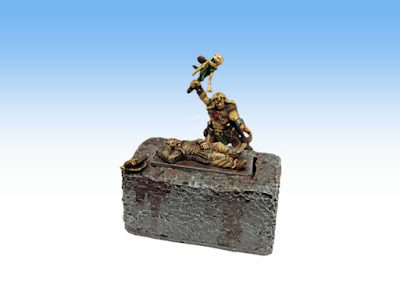 Apologies for the lack of posts recently – lack of gaming and modelling time means I haven’t done much hobby-wise.

I have however made a start on the specialist terrain needed for Forgotten Pacts. I’ve cobbled together a sacrificial altar (out of foam and No More Nails glue), for the Rescue the Prince scenario.

The prince in question is a Warlord Games Celtic casualty figure.  I’ve a few more left and have an idea for them – more of which at a later date. 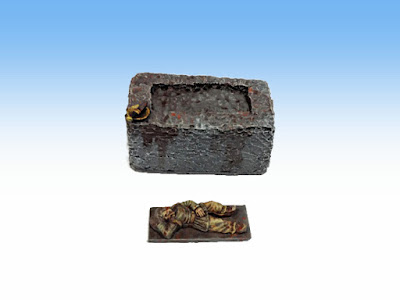 Oh, and please don’t forget my little competition (https://frostgravery.blogspot.co.uk/2018/03/50th-lead-adventure-page-giveaway.html) – there are still a few more days left to enter!
Posted by JP at 15:29 No comments: