There’s a reason for my lack of updates, for I’ve been incarcerated in the dreaded Dark Castle!


Yes, the Kickstarter campaign that I wrote about previously has delivered the goods, and I’m now the proud owner of the core Escape the Dark Castle game and the Cult of the Death Knight expansion. 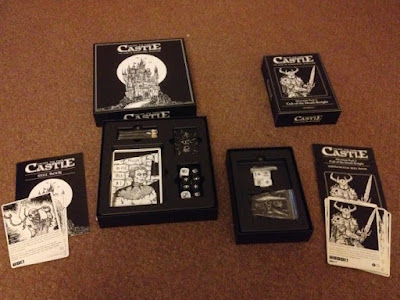 I’ve played a few games, both solo (when you play two characters) and with my eldest daughter and they’ve been great fun, even if we only managed to escape once! For my last game (using just the core set) I took a few snaps, to give you a flavour of the challenges that await… 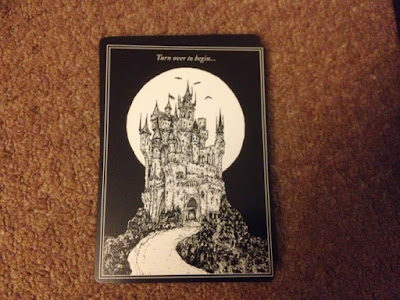 You start off by choosing a random, face down, boss card – the Big Bad that you have to defeat, should you survive everything else that’s thrown at you, in order to win the game. All the characters have to survive. If one dies, then you all lose. 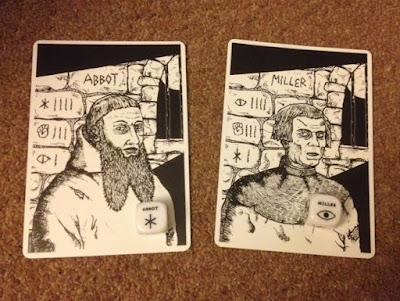 Next you shuffle the chapter cards and place 15 of them face down on top of the boss card. On top of these you place the start card. You shuffle the item cards and put them face down to one side and then choose your characters. For this game I chose the Abbot and the Miller. Notice those symbols and marks next to them. Those are their stats – might (fist), wisdom (star) and cunning (eye). Note that the Abbot scores well on wisdom but not cunning, while the Miller is the opposite. Both have a pretty good might rating. These stats are reflected in their character dice. 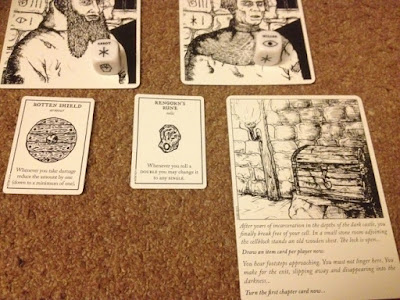 So the first card is turned. This is the start card, which is always the one you begin with. It allows you to pick up a couple of items, in this case a rotten shield and a rune stone, which will help you in your escape. Items are also picked up after defeating adversaries in combat, and if passing certain tests in other chapter cards. 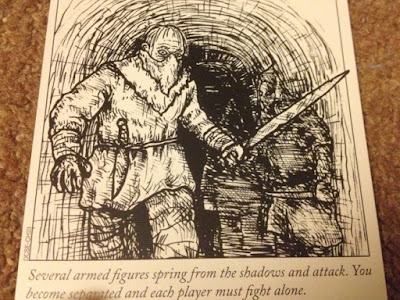 And so the first chapter card proper is turned. Deciding who should turn each card is an important aspect of the game, for sometimes events will occur that relate to that character (noted as YOU in the card text). The text in italics must be read aloud by whoever turned it. This time it’s a bunch of brigands, who surround and separate us, meaning that each character must fight them alone. 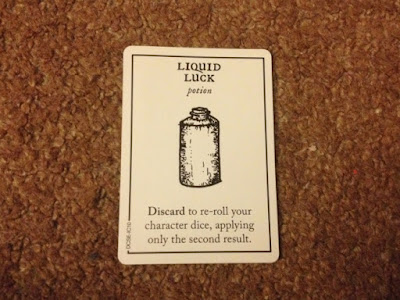 The Abbot and the Miller manage to defeat the rogues and thus draw an item card. What’s this? Liquid Luck! That’ll come in very handy. You can only carry two items each (or one if it’s a double-handed item). However you can swap items and temporarily put them down (to eat an item of food for example) at the end of each chapter. I battle through a few more chapters, dodging vicious plants, negotiating crumbling stairs and fighting evil minions. 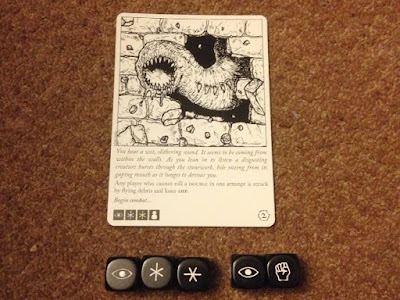 Later on I nominate the Abbot to turn the next card – he’s carrying the shield, so takes less damage if something jumps out at him. Good job too, for a disgusting giant worm is on the hunt for it’s dinner! Note the black chapter dice and the corresponding icons on the bottom left of the chapter card. The first three dice correspond to the first three icons, while the next two correspond to the fourth icon, which means ‘roll the number of dice equal to the number of player/characters’. The white character dice are then rolled and whenever a symbol matches that of a black die, it is removed. Once all the black dice are removed you have won. However if black dice remain, then the creature deals out damage equal to the number on the bottom right of the chapter card. 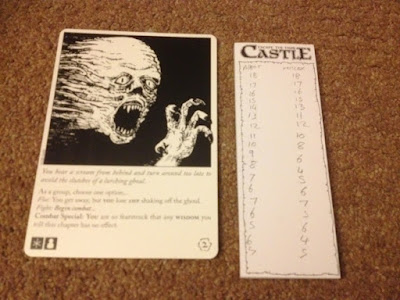 By now both the Abbot and Miller are in a bad way, but, with his shield still intact the Abbot turns the next card – big mistake - a hideous ghoul attacks and the Abbot is so terror stricken that none of his wisdom rolls count. Considering that this is his highest stat, and therefore one he is most likely to roll, this is not good news. With the Abbot next to useless, the ghoul is difficult to beat, as the dwindling health scores attest. Note that sometimes the health goes up – this is when a character has opted to rest, which means he gains one health but doesn’t take part in the fighting. 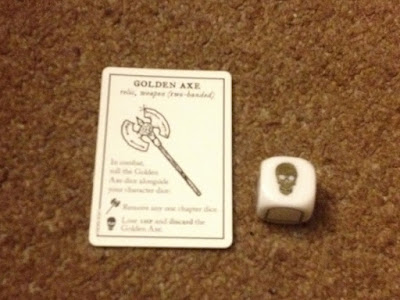 The fight with the ghoul leaves our intrepid pair with dangerously low health, but a search of it’s lair reveals the fabled golden axe! This weapon gives you an extra die to roll in combat and is very powerful. However it can also suck the life out of the wielder if you roll the skull symbol – something that happened to me with depressing regularity in previous games. With health low I can’t take that risk and opt to leave it where it is. 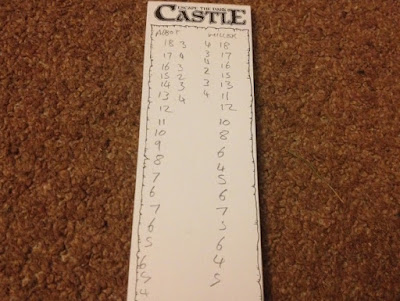 A few more encounters as I work my way through the chapter cards. There are more challenges and more battles. Both escapees are at a mere 3 health when they come across a cook. Luckily they manage to sneak off with one of his pies by rolling the right symbols, bumping their health up by one precious point. 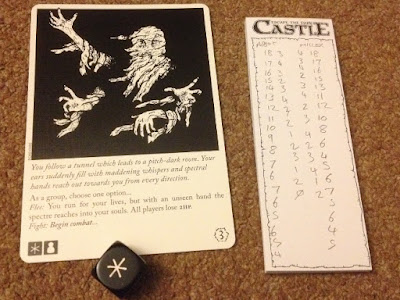 But in the next chapter it all comes to an end. Strange spectres reach out of the gloom, dealing a whopping 3 damage in combat. The Abbot and Miller battle valiantly – the Abbot’s shield soaking up some damage – whilst resting as much as possible. However eventually the Abbot succumbs to the spectre’s icy grasp – game over with only one more chapter card before the boss battle!

I’m really enjoying this game – the game mechanics sound pretty simple at first, but there’s a lot more to this game than meets the eye. As you can see, deciding who turns the next card can be crucial, as is item placement. There’s a real false sense of security at the start, when you’ve got 18 health, but as the game progresses and you start to get into single figures you really have to think about your next move.

I also love the look of the game. Being a gamer of a certain age I was brought up on Fighting Fantasy gamebooks and the like: the look and feel of which this game has in spades, right down to the notepad and pencils. The cards are also nice and sturdy and the dice are of good quality.

Despite hurricanes in China and a surprise customs inspection the game was delivered in good time, making my first crowdfunding experience a good one (marred only by my own impatience I’m ashamed to say.) Congratulations to Themeborne for coming up with a great game and running a brilliant Kickstarter campaign!
Posted by JP at 12:34 No comments: 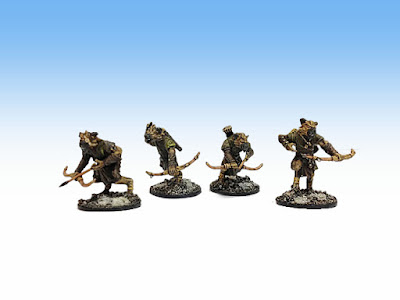 For me the festive season was very quiet wargaming-wise, but I did manage to finish off some Gnoll archers, knocked up from the Northstar Gnoll box set.