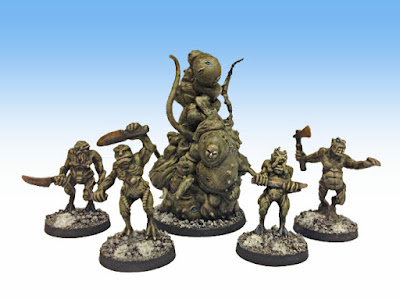 As time passes, things age and thus Ambronnax, the Endower of Senescence, squats ahead of the ticking seconds, feeding on the decay as they pass.

It is said that when it manifests itself, the demon's chosen form is that of a giant ape with two boar-like heads. Clutching a glowing ball and hovering on a magical disk it brings decay to the very passage of time itself.

However it is also whispered in certain forbidden texts that it also takes another form – that of an ever-changing mass of flesh. This shifting tower of gibbering bulges, all-seeing eyes and lashing tentacles has driven many a man mad.

Accompanying this monster are the Failing Wretches – half-formed, lumpen and limping travesties of the human form that heft their noxious and decaying weapons in the service of their master. 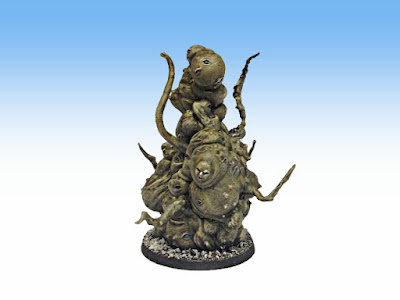 Continuing on the Forgotten Pacts bestiary we come to the demon Ambronnax and the Failing Wretches. Like most of the demons in this expansion, Ambronnax has a very specific description that is difficult to achieve without some major conversion work.

After much thought, I decided to avoid trying to make this creature by the book, and chose instead to use a different model that instils, I hope, the same feeling of decay. The most obvious choice would be a Warhammer demon of Nurgle, but I much prefer the look of this Fenris Games Son of Yog-Sothoth model. 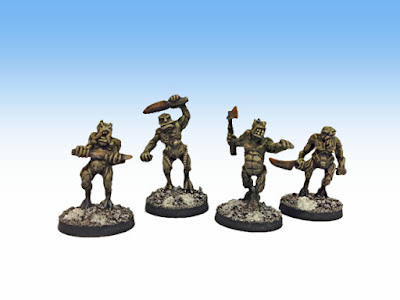 For the Failing Wretch Minions I once again turned to CP Models and their Demons range. This pack of four minis make great wretches in my opinion. No painting experiments this time – just a basic greenish colour scheme with a hint of pink, which my photos haven’t picked up, to accent some of the features.