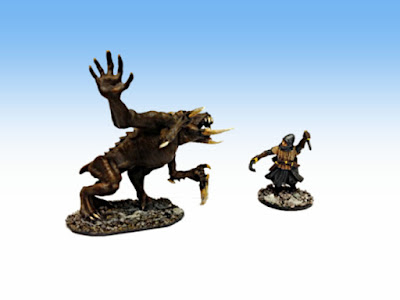 The tracker winced, wishing that his new employer would keep his voice down. Thankfully the creature squatting at the other side of the clearing seemed more interested in it’s meal than any noisy wizards.

“None my lord, for they are the natural offspring of this world.”

The wizard’s apprentice joined the pair and peered around the pillar they were hiding behind.

“That’s a beast of nature? Like a bear or boar? I don’t believe it!” 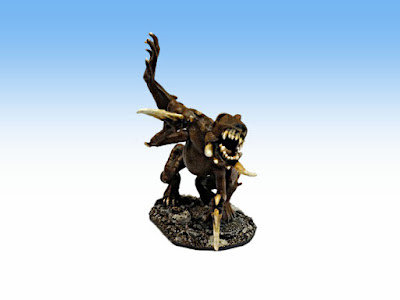 It was indeed a strange thing, the tracker mused, watching as the animal held down it’s prey with one pair of powerful arms, whilst another, smaller pair delicately sliced off chunks of flesh with bladed ends.

“Aye, it suckled at it’s mother just like you and I, young master.”

“Huh!” the apprentice sniffed, “My mother's nothing like that!”

"Don't forget I've met your mother..." muttered the wizard as he flicked through the large grimoire he habitually carried with him. “Ah, yes… It’s a Foulhorn isn’t it? Looks a bit different than the illustration… Says here that the ancients used them in the Millennial Circus due to their ferocity.”

“And they also have very good hearing my lord," said the tracker as the Foulhorn raised it's head. "Perhaps we’d better make a run for it…” 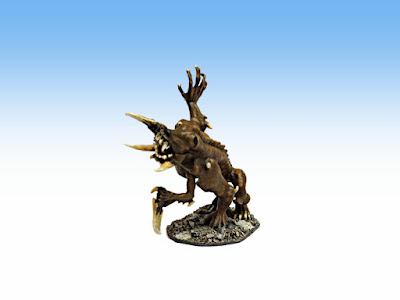 Foulhorns are another of those Frostgrave creatures that are quite specific in their description. These powerfully built hunters are horned beasts that not only have normal limbs, but also a pair of arms that end in sword-like blades. They appear primarily in the Arcane Locations supplement (also collected within the Frostgrave Folio), but also get a mention in Forgotten Pacts.

The base model for my version of the creature, which differs a little from the illustration in the Folio, is a Reaper Bones Numenera Ravage Bear. To this I have added a pair of Tyranid arms I got off eBay. They’re rather puny looking compared to the model’s arms, so I glued them to the front of the body, rather like the little arms of a T-Rex.

The paintjob is quite a simple one – maybe a little dark, but I’m happy enough with it. 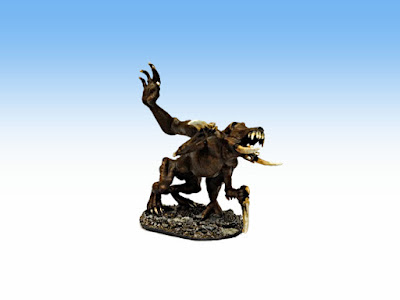 I’ve also knocked up a couple of pillars. These came about due to the sprue exchange thread on the Lead-Adventure Forum, where participants puts their unwanted stuff in a box and posts it to the next person on the list. This person takes out the bits he/she wants, puts in some unwanted stuff and sends it on, etc. etc.

This time around there wasn’t anything I particularly wanted, but I did take out a pair of Weeping Angel figures – freebies from a Doctor Who magazine I believe. They aren't the best sculpts (I cut the arms off one as they were so badly done) and are made of in rubbery plastic, but they’ll do for statues. A little bit of plastic tubing and some texture and voila, some (rather wonky) pillars. 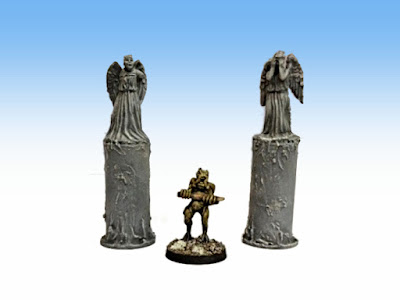