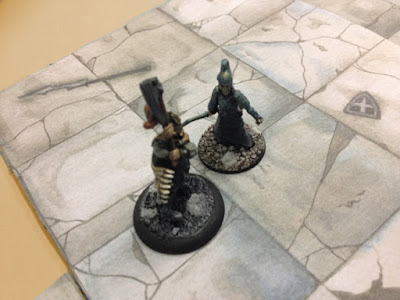 “They say we're young and we don't know; won't find out until we grow…”

The lyrics of a strange and alien song died away in his head, along with memories of an icy death.

As he opened his eyes he focussed on the worn stone floor stretching out into the gloom before him. Unsteadily he got to his feet as in the distance the sound of clattering bones could be heard… 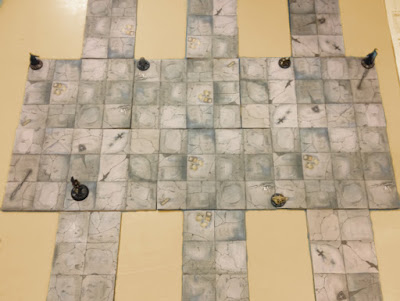 Time for another crack at Alone in the Crypt! I didn’t have my copy of the Frostgrave Folio with me, so I used the same captain stats as I did in my previous, and very unsuccessful, venture. This time our hero started on far left of the crypt. Learning his lesson from last time, he fired an arrow at the nearest armoured skeleton, but missed. 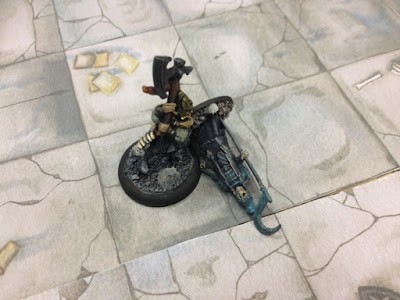 Maybe getting out fast was the key. With this in mind he moved into the nearest chamber, but no exit could be found. Thwarted, the hero re-entered the main crypt and ran smack bang into the armoured skeleton.

Luckily he easily dispatched his foe, but another armoured skeleton was approaching. Could he shoot the creature down? No – the shot missed once more, so he readied himself for another attack. The skeleton lunged but was defeated at a stroke. 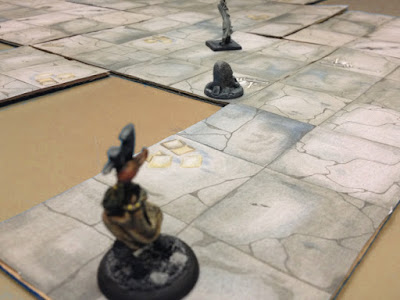 With the crypt temporarily free of terrors, our hero had time to investigate the nearest treasure. It was a nice bag of gold – now why did that sound familiar? After fruitlessly searching another side chamber on the opposite side of the crypt, the sound of moaning alerted him to a new danger – a frost wraith! The strange sense of deja-vu grew stronger… 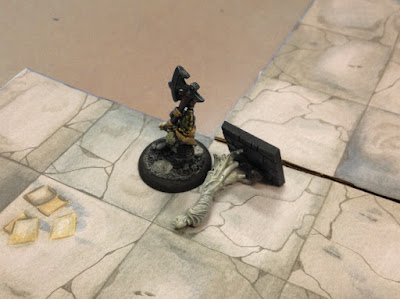 He fired his bow, but missed again! With disturbing memories fleeting through his head, our hero defended himself against the wraith’s attack and parried, thankfully shattering the fiend into shards of ice. Once again the place was empty, so he searched another chamber for doors with no success. As he left the chamber and headed back into the main crypt, a zombie began shambling towards him. Once again arrows failed to make their mark and so the zombie closed in, clawing at our hero. He fought back, reducing the zombie to 1 health before pushing it back and making a run for it, preferring to get out as quickly as possible whilst avoiding the slow creature. 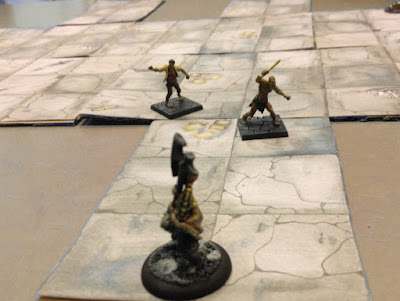 With this in mind he crossed the main crypt to begin his search in the remaining chambers. Once again he found nothing, and abandoned his search after a guttural growl emanated from the shadows. Suddenly a ghoul loped across the flagstones towards him. 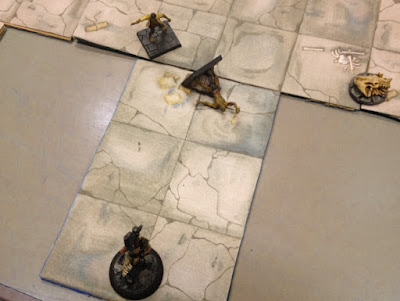 Our hero found himself hemmed in a chamber, with the ghoul and zombie blocking his path. Taking no chances and in an attempt to even the odds, he notched his bow with a magical +3 arrow. He fired, and hit home! Squealing, the ghoul went down.

He raced out of the side chamber, easily avoiding the zombie. There was a glint to his right – more treasure! Should he investigate? Well the zombie was down to 1 health – what harm could it do? He rummaged through the debris and found a valuable fate stone. If need be he now had a re-roll to get him out of a sticky situation. The clattering of bones alerted him to the arrival of a skeleton. Distracted, he did not notice the zombie until it was too late. As they fought, the Dice Gods picked up their D20s and rolled… The zombie got a 20! And thus our hero went down in a spray of blood and innards as the zombie enjoyed it’s lunch.

Argh! I stopped to get treasure again! Will I ever learn? Still, I did better than in the last playthrough. Shooting was an issue, so next time I’ll re-do the stats to improve the shooting modifier. The crypt hasn’t finished with me yet…
Posted by JP at 18:00