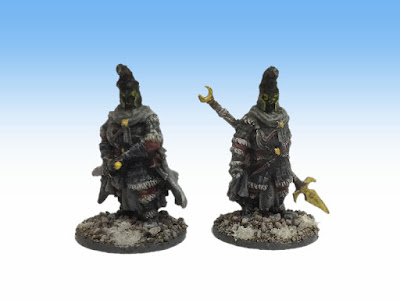 Long story short, I found these an absolute bugger to paint.

It’s a shame, because they’re the first official Frostgrave figures I’ve bought – brand new and with my own money. Not swapped, cadged or got second-hand, but fresh in their blisters from Annie.

Don’t get me wrong, they’re cool miniatures and, while I had to take off more flash than expected, they didn’t take much prep work. But for some reason I just couldn’t get on with painting them.

Maybe it’s my technique – I’m pretty old-fashioned when it comes to painting minis: I still like to drybrush on highlights for example – so despite them having lots of nice texture, perhaps they suited a different approach… Dunno.

It took me three attempts to get the glowing eyes effect somewhere near right and... eurgh... in the end I gave up and drybrushed a dusting of white over everything – maybe they’re related to Frost Wraiths or something.


For the sake of completeness, here they are anyway.
Posted by JP at 15:02

Email ThisBlogThis!Share to TwitterShare to FacebookShare to Pinterest
Labels: Miniatures