The Ten Schools of Magic in Miniature 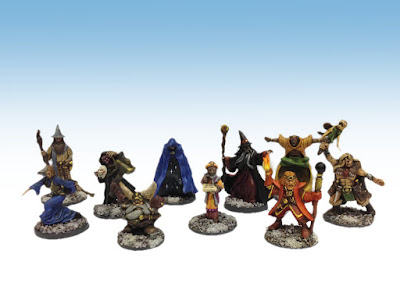 As part of my plan to build a generic warband for introductory games, I decided to have a wizard from each school of magic. This will give prospective players some flexibility in the style they want to play.

You’ve already met Thaddeus Daemoncall (Summoner) and Friedrichvon Unaussprechlichen (Necromancer, natch), so here are the others… 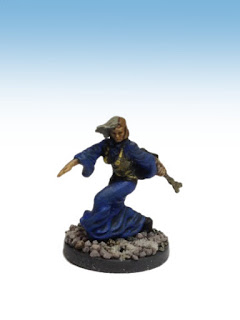 Aeon Flixx hails from a dying civilisation centuries in the future of the Frostgrave world. While her contemporaries excelled in advanced science, technology and engineering, she is was of the few archaeologists to have studied and mastered the ancient art of sorcery.

At the zenith of it’s achievements, the perfect society into which she was born faced (or will face) utter destruction by a rediscovered ancient artefact. With their sciences failing them, Aeon is sent back in time in a desperate attempt to prevent the apocalypse by finding and destroying this mysterious device. 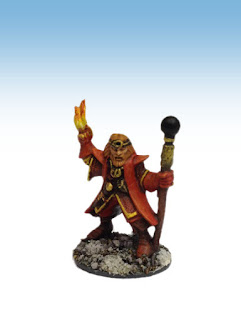 Court magician to one of the many city states lapped by the warm waters of the Middle Sea, Vym was used to a life of honour and majesty. With his all-important social standing akin to that of the dukes and duchesses that squabbled for his services, he spent a fortune in fine clothes, wines and such in order to keep up appearances.

Alas all this expenditure could not be sustained for long, and after years of opulent living, Vym’s finances began to run out. Proud and arrogant, he chose self-exile over the ignominy of bankruptcy and now heads towards the fabled frozen city in search of riches and treasures. He vows to regain his former wealth one way or another so that he can return home with a chest full of gold and many a tale to dazzle the wealthy ladies at court. 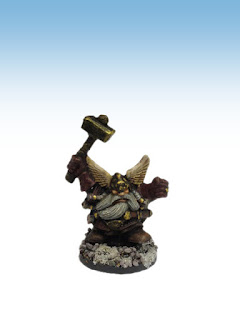 One of the greatest Hammerlords of the Underhalls, Orri Gelthammer has practiced the Dwarven magic of enchantment for decades, rising from a lowly apprentice in the smelting chambers to managing the vast engineering workshops that honeycomb the Great Grouch.

However something has been lacking in Orri’s life these last few years. He has grown restless, his existence trundling along like a well-oiled excavating construct with no real goal or purpose. That was, however, until news of the great thaw reached the Dwarven holds. Now he seeks a life of adventure, taking on whatever Frostgrave can throw at him with a well-timed blow of his magical hammer. 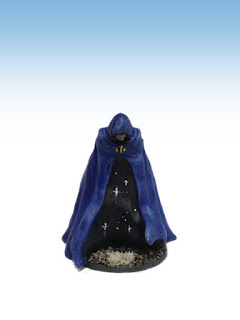 As is befitting any truly great illusionist, Mazement’s background, and indeed real name, is shrouded in mystery and conjecture. She once claimed to be an exile from the Great Citadel, deep in the heart of the Faewold, while another time she proclaimed herself the reincarnation of the last Princess of the Glass River. Others would have you believe that she is merely a lowly street magician with ideas above her station.

Whatever her history, Mazement has come to the frozen city in search of who-knows-what? Bringing bedazzlement and misdirection, smoke and mirrors, she hunts for something. What that something is though, she will not tell – or possibly has changed her story so many times that she no longer knows…

Figure is a Heroclix 'Cloak' 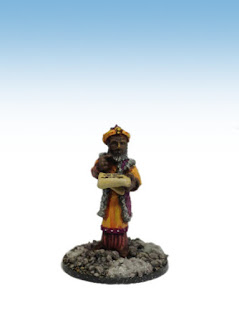 Azul Azulzul; scholar, author and bibliophile; has spent most of his life in the musty atmosphere of the Great Library of Al-Zandrya – greatest of all the cities of the Southlands, jewel of the Parched Kindoms and seat of that mighty patron of learning, Sultan Ozman the Curious.

Content with a lifetime of studying, dissertating and cataloguing, he was dismayed to learn that he had been chosen by the Sultan to lead an expedition north, after tales of the frozen city began to filter down through the caravan routes. Unwilling to disobey his master’s command and secretly keen to get his hands on some rare tomes and esoteric texts; he has made the long journey northwards.

Figure is a Midlam Miniatures Scholar 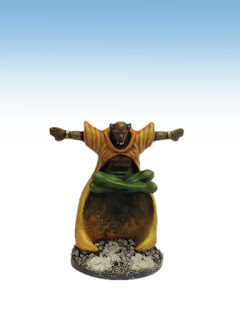 Clad in the once brilliant vermilion robes of an eastern holy man, Om has crossed the oceans from the mysterious vastness of the Orient to the less civilised lands of the Old Empire. Of his life before this adventure he says little, preferring to smile benignly before returning his gaze to the stars (or his navel).

All that is known is that Om received a series of visions and portents that led him to embark upon his quest. Though obviously hailing from warmer climes, this barely-dressed seer remains curiously unaffected by the chill. Perhaps the fact that he perpetually hovers several inches in the air, thus keeping him off the cold ground, has something to do with it.

Figure is a Heroclix 'Dr. Druid' 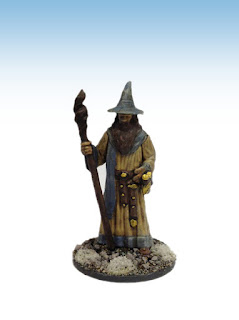 Pious, charitable and selfless, Dumbledelf the Staid lives his life in accordance with the Umpteen Commandments, as set in stone by his god (and then reinterpreted, mistranslated and edited by centuries of conclaves, edicts and parish meetings) in ages past. 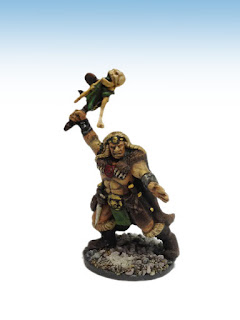 As a shaman of the mightiest tribe to dwell on the fringes of the Great Blasphemy, Cave Bear combines the witch’s gentle study of nature with the crazed bloodlust of the barbarian. He reached the pinnacle of tribal society after brutally bludgeoning his successor to death with a rock, as is the custom, and has led his tribe in spiritual matters ever since.

However he now grows old by barbarian standards, having reached a whopping forty-seven summers. With younger witches beginning to size up suitable rocks, Cave Bear has decided it is time to embark on a mighty trial of strength. His journey to Frostgrave is but the first step in this ordeal and now he must survive the frozen city before returning triumphantly to his tribe with riches beyond compare, and a much bigger rock.

Figure is a converted Warhammer Quest Barbarian
Posted by JP at 16:04