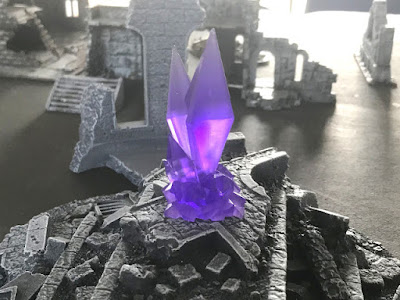 Once every four years, a leap year occurs and there is another day in the calender. Felstead is no different, but has the added complexity that the Chronomancers carried out many of their experiments on that day; some of which are still in operation even now and the thawing ice have uncovered them.

Your wizards and entourages are searching the area of ruins, colloquially known as Tindalos, on just such a day and stumble across one that is a work in progress, huge Time Crystals have thrust up through the ruins, complete with the mysterious beasts known as Chronohounds.

So read the introduction to Giles’ homebrew scenario for the second session of the Leap Day festivities. Unless the wizards could destroy the crystals, the vicious and relentless Chronohounds would just keep on coming. 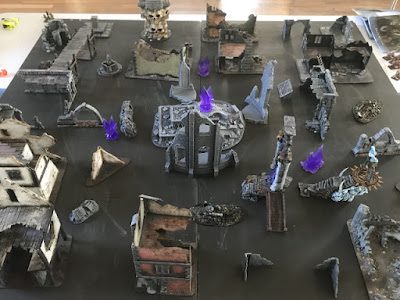 As if this wasn’t incentive enough, with just one treasure each on the table, the crystals would also yield up two treasures each if destroyed. My Sigilist, Sister Sans-Serif, took to the field on the ‘purple table’ against Giles’ Chronomancer Rassilon and Gavin’s Elementalist. 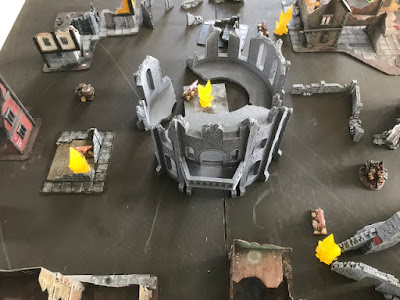 Meanwhile, my former opponents Alan and Glyn faced another Chronomancer in the form of Rob’s wizard on the ‘yellow table’. With each crystal boasting an impressive armour value of 16, who would prevail? 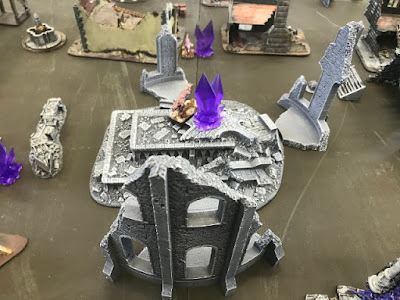 Each Chronohound started off next to a particular time crystal. Soon they would leap into action, hunting down anyone within range, their special affinity with time allowing them to see their prey through any terrain. If they were defeated, they would simply reappear at a random corner until their parent crystal was smashed, causing them to disappear completely. 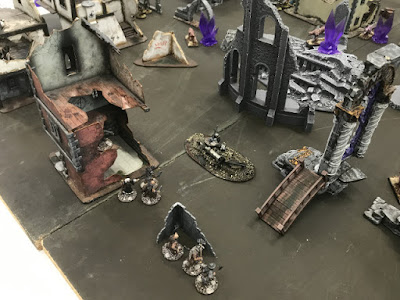 Unlike the previous game, we opted to deploy on a table edge as per usual. Perhaps it was the swirling eddies of time, or perhaps it was just the fact that I couldn’t be arsed to move to another table edge after the first game, but I found myself flanked on both sides by my opponents. 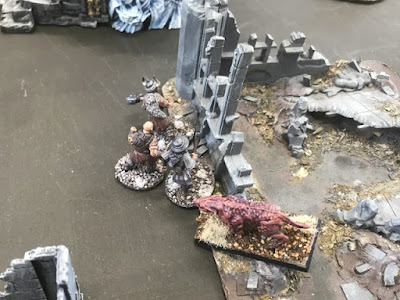 Undaunted, my warband moved forward. Once again my laziness was my undoing, for my warband placement meant that the nearest uncontested crystal was at the opposite side of the table. On my right flank, my soldiers were beset by a Chronohound, which appeared behind them after being defeated by Giles’ band. 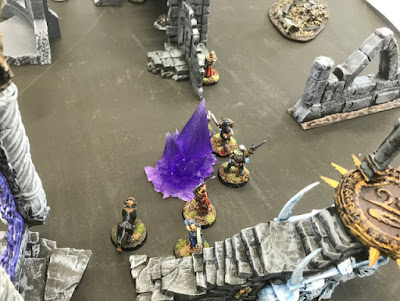 The rest of the Chronomancer’s men converged on a crystal and began to chip away with it. On my part, I tried to plough through the opposition using the old Wizard Eye/Grenade combo once again (my Sigilist really must learn to try out some different spells). 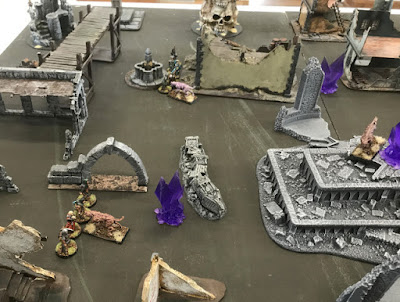 On my left flank, Gavin’s warriors also advanced towards a crystal, attracting the attention of a nearby Chronohound. It leapt towards them, slavering and howling. Oh, I forgot to mention that each phase was timed, giving each player three minutes to declare their actions, lest they lose them! 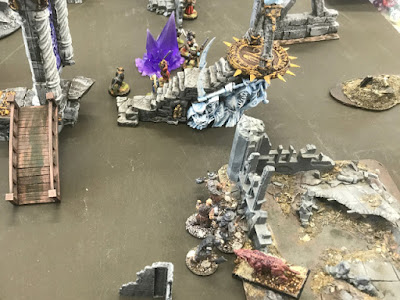 Back to the right flank and my soldiers were still battling the Chronohound (stats for this creature can be found in the 'Perilous Dark' supplement by the way) while, a little ahead, Giles’ team chipped away at the crystal. 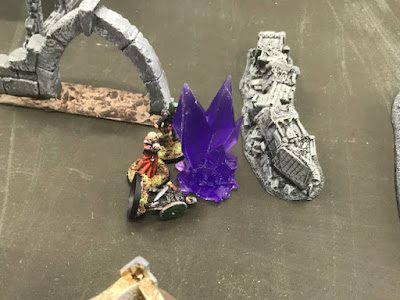 Gavin’s soldiers found such crystal-bashing hard going; the eldritch eddies of time emanating from the thing causing his warriors to fall withering to the ground (each crystal had a fight of +1). 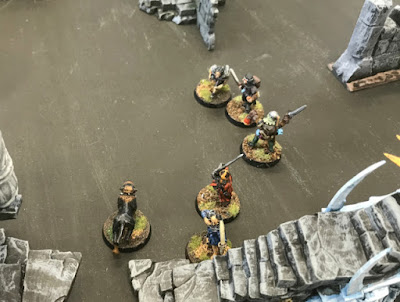 Meanwhile, the Dice Gods smiled on Giles and a crystal was shattered into pieces. Luckily this also released my men nearby from the threat of the attacking Chronohound as it vanished into the time vortex. 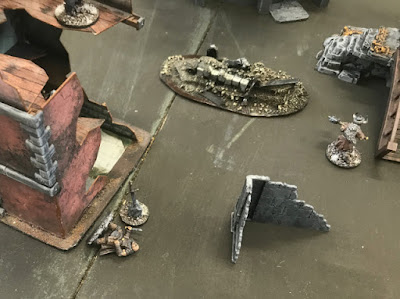 With my own rolls being somewhat lacklustre, it was looking increasingly unlikely that I would reach any crystals, let alone destroy them. Cutting my losses my thief made a run for it with a treasure token he had managed to dig out. Alas, an Elemental Ball up the jacksie put paid to his thievery. 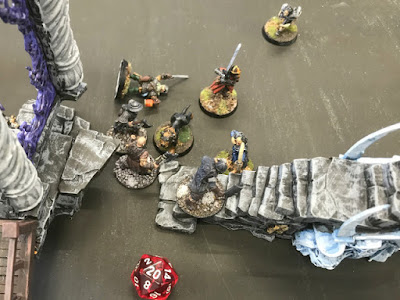 Freed from the Chronohound menace, the thugs on my right flank moved up to engage Giles’ warriors, cutting one his treasure hunter with a timely critical hit. 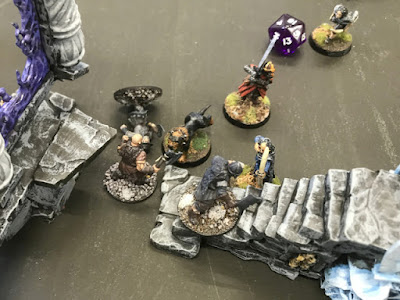 However the tide soon turned and the counterattack began to overwhelm the team. During all of this, my wizard (and apprentice, when she rolled well enough) stuck to the unimaginative tactic of hiding away and lobbing grenades through their Wizard Eye spells. 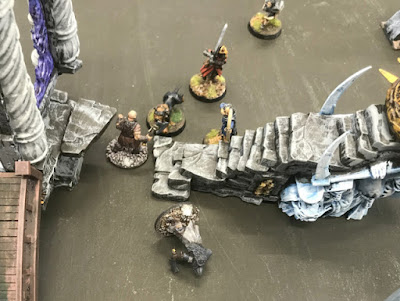 Once again my warband was being whittled down. Outflanked and with little to be gained by hanging around with all those Chronohounds, it was time to limp away with my single treasure and allow Gavin and Giles to share the rest of the spoils between them. With Giles being the only player to smash a crystal, he was the overall winner on our table (bizarrely, on the other table the crystals were all smashed in short order!) 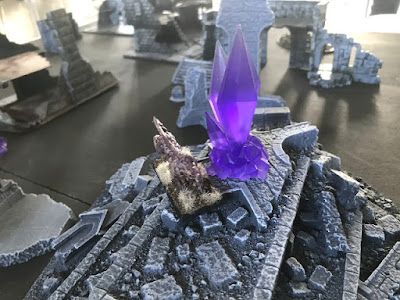 Giles’ scenario was a challenging one, but great fun. In hindsight I should have paid more attention to warband and crystal placement. Fighting the opposing warbands was also a bad idea as I should have mobbed the crystals instead, but hey-ho; all-in-all it was a cracking day’s gaming with some good chums. Thanks Giles for organising it!
Posted by JP at 08:00