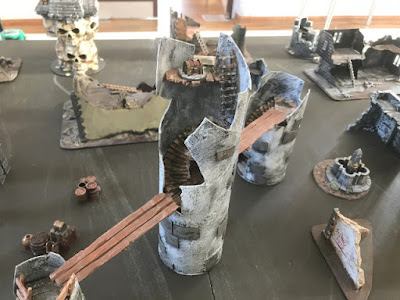 My old pal Giles organised a Frostgrave gaming day last Saturday, which of course was February 29th -  Leap Day. And so, with the laws of time in flux (and me running late due to car issues), let us jump into the first game without further ado! 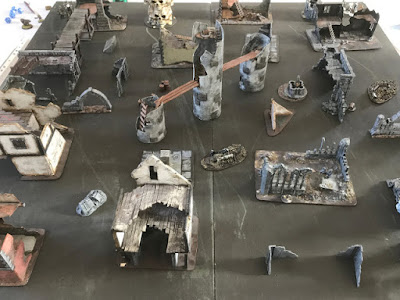 Most of the guys had already given their warbands a run out or two, so I brought my level 3 Sigilist warband (last seen here). Thus, Sister Sans-Serif found herself pondering the Mysteries of the Silent Tower. After placing two treasure tokens each and plonking another on top of the central tower (worth two rolls on the treasure table) we kicked off. 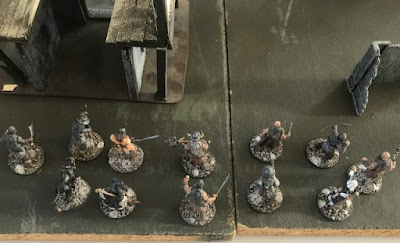 With three players per table, we (Alan, Glyn and I) agreed to deploy in a Y-shape – in other words Alan and Glyn deploying in a triangle formation at adjacent corners with me deploying in a small rectangular formation at the centre of the opposite side. Note I have 12 figures, thanks to having an inn as a base and an illusory soldier in the ranks. 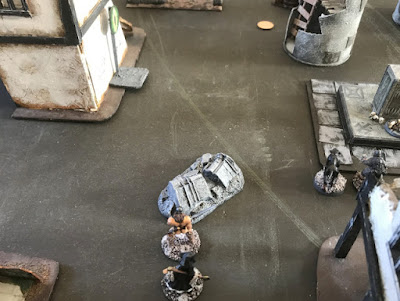 My Sigilist (and barbarian bodyguard) edged forward, casting Wizard Eye on the nearest flat surface. Through this she cast Explosive Rune in an attempt to mine the approaches to the mysterious towers. However a little later on I realised that this was a touch spell, so I sheepishly moved the MDF marker to the base of the eye. 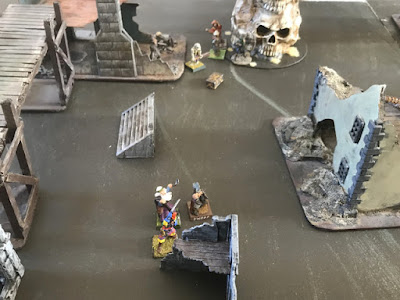 Alan’s wizard, using a combination of Telekinesis and Raise Zombie, snagged a treasure early on in the game. I can’t remember what school his wizard belonged to I’m afraid. 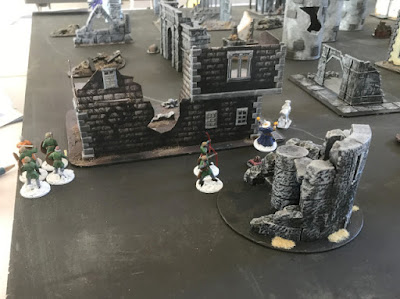 Glyn’s warband also pushed onwards. Again, I can’t remember what type of wizard he was fielding – sorry! (Edit: it was an Elementalist - cheers Glyn!) All the terrain was Giles’ by the way – saved me having to lug all my stuff around! 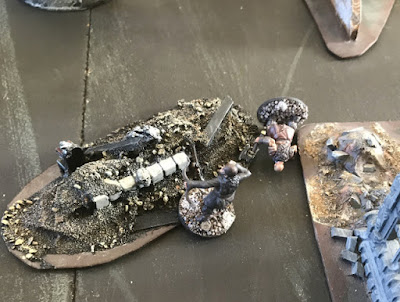 One of my thugs and an archer moved up into position, only for the warrior to get himself shot. My other archer had taken up position on the upper floor of a ruined building, overlooking the towers and connecting walkways. 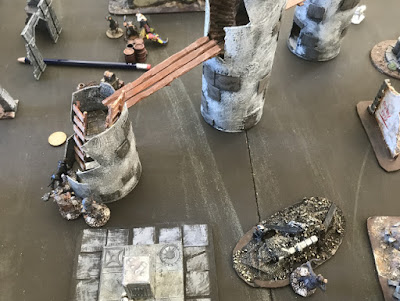 Seeing his comrade fall, the archer drew a bead on Alan’s captain and fired, scoring a critical hit! Thus the mighty captain was killed, much to Alan’s chagrin. 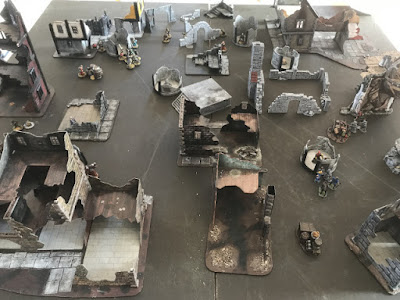 Here’s a quick photo of the other table, where the here other players (Giles, Gareth Gavin and Rob) fought spooky wraiths in the Haunted Houses scenario. Apparently Giles had the **** beaten out of him! 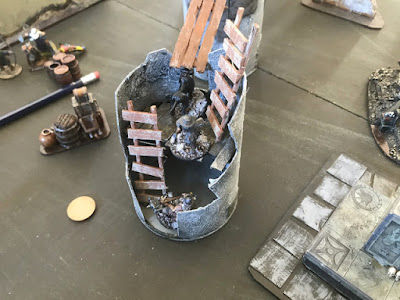 As our warbands exchanged blows and shots, we each eyed up the special treasure atop the central tower. Two if my soldiers reached the towers first, causing Alan to send across his bear, which had previously been menacing my wizard on my left flank. 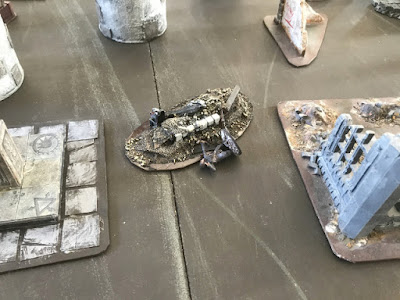 The avenging archer went down; bad news, for the only shooty ranged attack spell my Sigilist had was Grenade, which she would lob through her Wizard Eye. Consequently I relied on my archers quite a lot. 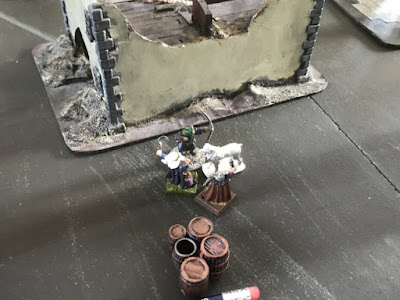 Alan’s wizard and his retinue contended with Glyn’s warhound. Things followed the standard pattern, resulting in one dead dog. 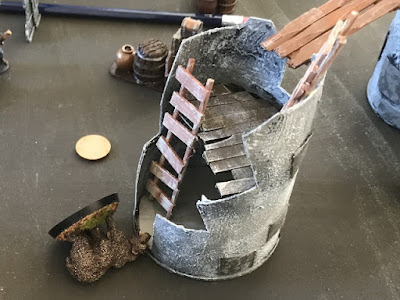 Alan’s bear lumbered towards the tower wherein my soldiers and clambering. Thankfully the old Wizard Eye/Grenade combo splatted the beast into a rug, allowing them to scamper across the walkway to the central structure. 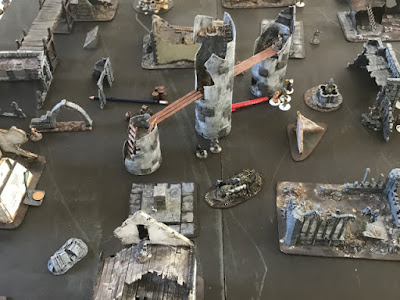 A bird’s eye view of the action. Note my archer at the bottom centre-left, enjoying an unrivalled view of the towers. The pencils lying on the table are not us being messy, but were actually stand-ins for Wall spells (we’d all forgotten to bring walls with us). 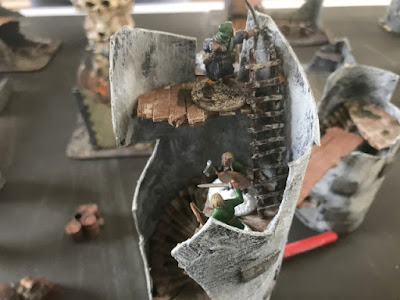 Alas, as the other players’ warriors set foot in the towers, my soldiers were soon ejected (one, luckily the illusory one, falling from a gantry thanks to Alan’s horn of destruction). Alan’s archer got treasure first, with Glyn’s men-at-arms in close pursuit. 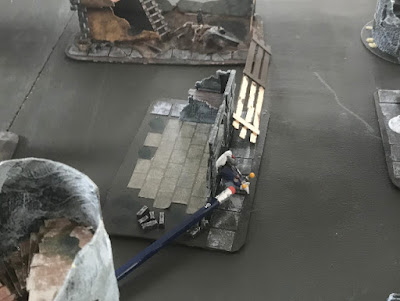 For most of the game, Alan and Glyn had a gentleman’s agreement not to attack each other’s wizards. This didn’t stop Alan wresting a treasure from Glyn’s warband or, as the game edged to a close, shooting Glyn’s wizard as he unwisely poked his head around a pencil wall. 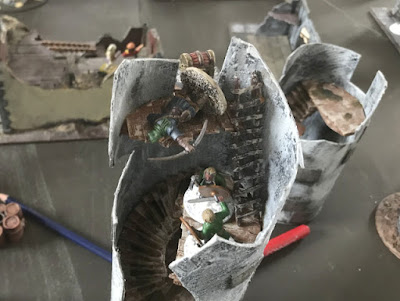 Deciding to redress the balance, my remaining archer took a pot-shot at Alan’s would-be treasure-nabber atop the tower. The shot struck home, allowing Glyn’s men to grab the fabled loot. 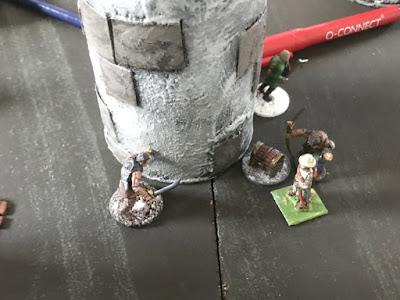 But could I now grab the treasure for myself? I was worryingly low on soldiers, but sent my somewhat battered treasure hunter forward to intercept Glyn’s soldiers as they descended the tower. However Alan’s men got their before him and mugged them first.

With casualties mounting and all treasures claimed, it was time to limp away from the silent tower. Alan was the clear victor with four treasures; giving him five rolls on the treasure table (albeit, unfortunately for him, all low ones. I'm afraid to say I felt more than a little schadenfreude at this). I could boast a respectable two, while Glyn had to content himself with one. 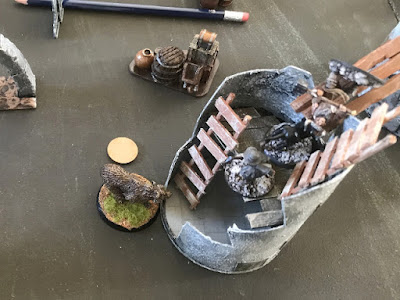 Time for a quick level-up and then on to the second scenario of the day. It being a leap day, Giles had written a scenario especially for the occasion. Would Sister Sans-Serif survive the dreaded time crystals or would she run ‘Out of Time’?
Posted by JP at 20:38