Aeon Flixx and the Temporal Tempest 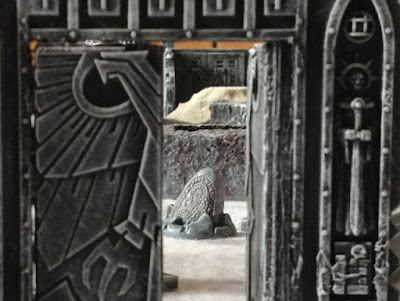 Aeon Flixx, Chronomancer, watched her apprentice and her companions depart until the swirling mists hid her lumbering frame.

“I hope you’re up to the task,” she sighed, before turning to the remainder of the warband. “Righto – let’s get a move on shall we?”

She led the band in the opposite direction, pausing occasionally to open her senses to changes in the time stream. 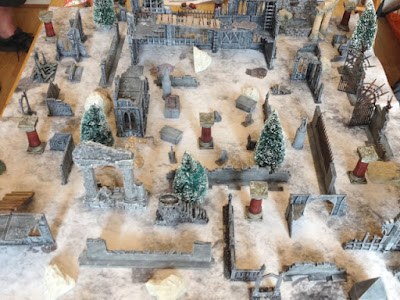 Time for the second in this three-part scenario: Time Rot. Once again the temple ruins are set up (well, rearranged from the last game) and treasures placed. This included the central token representing another Amulet of Constancy. 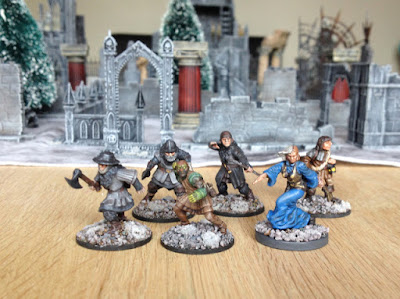 Aeon took the lead with the half the warband, including a mystic warrior. There was only one Failing Wretch this time, but a greater danger lay in the shifting time field, which altered according to the initiative rolls, speeding up or slowing down the warbands accordingly. 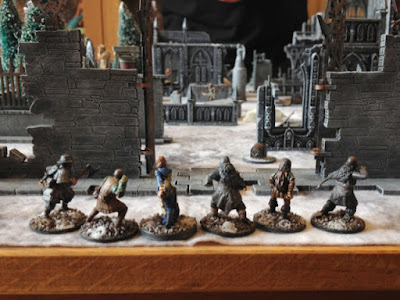 Our heroes reached the battlefield as time bent and stretched around them. In addition to the treasure tokens called for by the scenario, each band could grab one more thanks to the reveal secret spell. 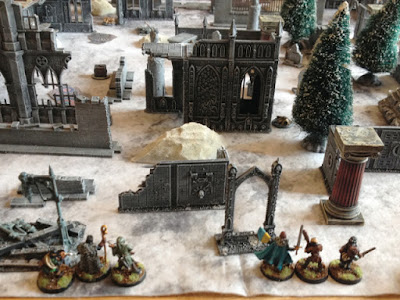 Opposite Aeon, the Illusionist apprentice Marvo brought his reprobates into view. At least this time I would get to go first regardless of the initiative (assuming the time rot didn’t stop me). 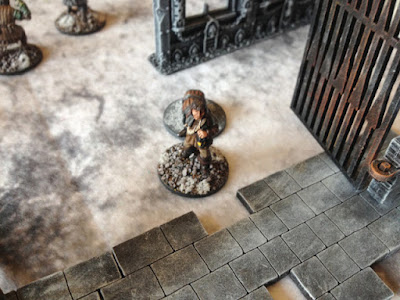 The first initiative roll saw my thief suddenly swept up in a racing current of time, giving him an extra activation. He sped towards the nearest treasure and grabbed it, before nipping safely out of harm’s way. 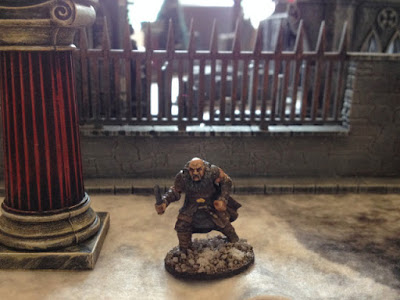 However his actions were not completely without consequence, as a barbarian thief, attracted to all the kerfuffle, decided to sneak onto the board, no doubt after his share of the loot. Thankfully he appeared out of sight of both bands and contented himself with wandering about aimlessly. 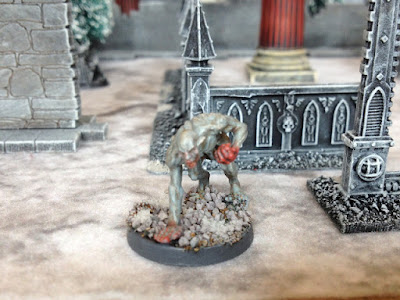 More treasure was claimed, attracting a ferocious ghoul. Again it arrived out of sight of the warring sides and spent the entire game milling around, no doubt disorientated by the shifting reality. 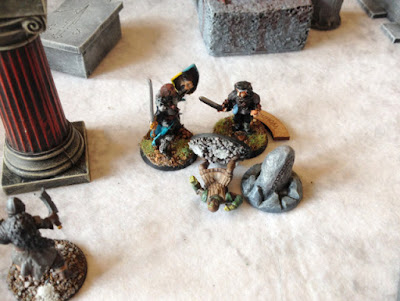 By now the enemy tunnel fighter had been zapped and wounded by an elemental bolt through a wizards eye, but that didn’t stop him joining his captain in pouncing on the central treasure. My mystic warrior moved to intercept, and, being mystic, mystifyingly fluffed the dice roll and ended up on the ground. 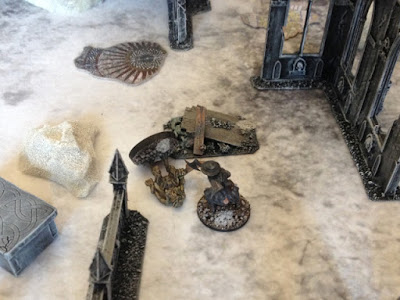 Meanwhile the Failing Wretch shambled in to attack my thug. He duly dispatched the unpleasant beast with his axe, thus avoiding it’s decaying touch. 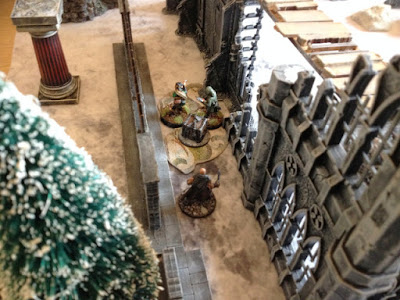 At one table edge, Marvo’s thug and thief were making their way back with a treasure token but were spotted by the barbarian thief. The miscreant made his way up an alley towards them. 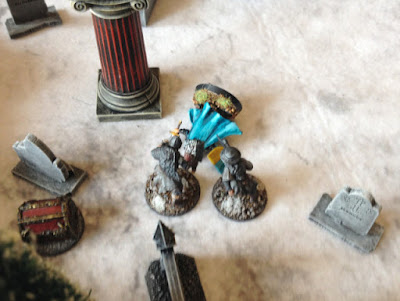 The enemy tunnel fighter was quickly transposed out of harm’s way, taking the second amulet with him. This left his captain, slowed down to one action due to the time distortion, to face my thugs. Thankfully the sellsword was no match for them and got clobbered into the snow! 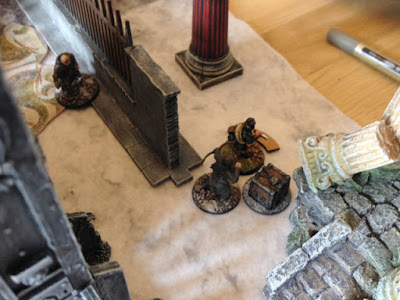 Robbed of the amulet, I was determined to claim as much treasure as possible. Despite the lurking barbarian, my archer moved up to stop the thug and archer. The thug was duly shot, popping out of existance due to his illusionary nature, before he closed in on the thief. 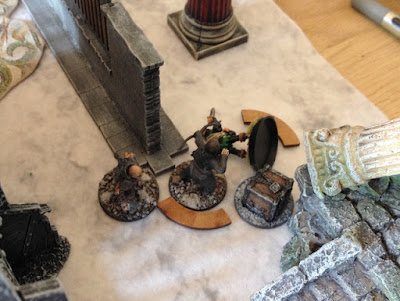 The barbarian eagerly joined in the fray. The archer was now outnumbered and wounded, but still managed to wound and then dispatch the enemy thief, causing him to drop his treasure. 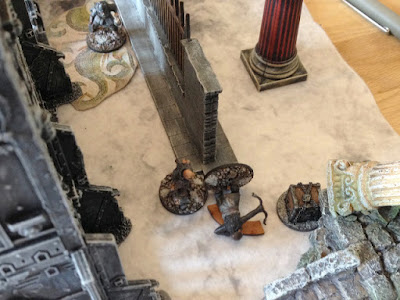 Alas though it was the barbarian that got the last stab in, felling the gallant archer. However reinforcements were on their way in the shape of the two thugs, while Aeon made things even more uncomfortable for the rascal by casting the decay spell, leaving him unarmed. 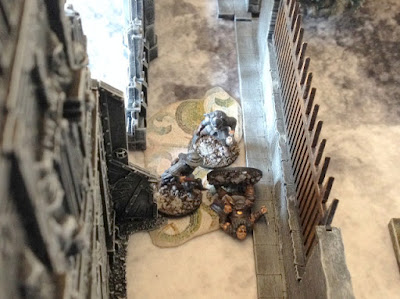 The thugs soon dispatched the weaponless barbarian, allowing Aeon to claim the lion’s share of the treasure. However she had not been able to obtain either Amulet of Constancy. She would have to face the oncoming storm unaided…

Another fast, furious and fun game!

The icy air swirled in strange patterns as the two halves of the warband gathered together. Battered and bruised, they quickly shared stories of how they fared while Aeon and Brunhilde hurried ahead, deep in conversation.

“So you couldn’t get it either? Damn!”

“No, don’t blame yourself – that conjurer has a knack of stealing the prize from under our noses. I just hope he know what he’s doing…”

“So all is lost mistress?”

“Oh no, but defeating the demon will be a lot more difficult… Unless…”

“Hmm, yes, given the temporal differentiation there’s just enough time… Take this gold, go to the market on the edge of the city and find the one they call the Demon Hunter. Go now – run!”