The Thing That Should Not Be (But Is) 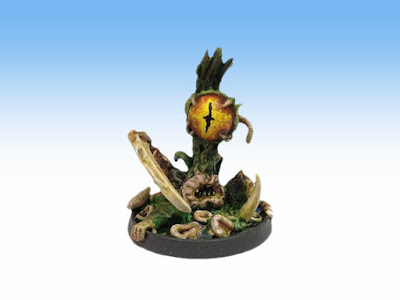 Life, or some sort of twisted semblance of it, went on in the abandoned potion factory as it had for centuries.
Small creatures scurried and burrowed along crumbling walls, avoiding by instinct the sticky rainbow coloured pools of tar and lay here and there on ancient stone slabs. Above them, winged things buzzed and wheeled, passing dizzily through clouds of noxious fumes.
Animated skeletons tramped in in never-ending patrols through dark chambers while damaged constructs and broken machinery strove to fulfil a myriad of tasks, heedless of the futility of their long-forgotten purpose.
Throughout the underground ruins, vats of chemicals and concoctions bubbled and plopped; thick, viscous and largely inert.
And so it went, day after day, year after year.
Until…
Intruders looking for treasure…
A dropped torch…
A chain reaction…
Nothing could possibly have survived the explosion. Potions, creatures, machines were all ripped asunder. Forces tore and things crashed together – merged together.
The thing that was born that day opened it’s great eye the moment it protruded from it’s seething mass. Pseudo-tentacles groped among the many-coloured flames as a partially formed maw opened to howl and roar.
It knew nothing of what had once been. It only knew that it was hungry…

An Alchemical Monstrosity for the Dark Alchemy expansion, scratch built from Greenstuff and various off-cuts from my bits box.