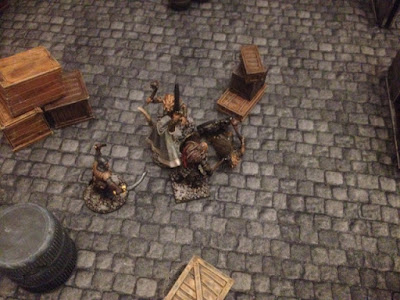 Annok growled as the weary warriors approached the imposing structure of Tor Varden.

“Those bastards gnolls got the jump on us and slaughtered the whole garrison but me,” he turned to the ranger Grey Leopard. “Will you help me get my revenge and clear out this nest of evil?”

The ranger peered up at the top of the tower and then down to the stout wooden door on the ground floor.

“Aye, that is my mission, but we cannot scale the walls and battering that door down will bring them running in their droves – we’d be outnumbered within minutes.”

The old soldier grinned and fished the key out of his haversack.

“Oh, no need to knock my lord, we can let ourselves in…”

Suddenly an all-to human scream of pain came from behind the stone walls.

“Someone lives!” Gasped Annok. “But not for long I’ll wager – we must hurry!” 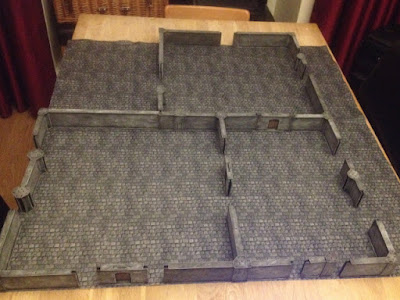 Time then to enter the watchtower of Tor Varden! Our heroes would have to be quick, for the longer they tarry, the greater number of gnoll defenders they must face. As well as working against the clock, this scenario is interesting in that you must roll for the type of room you go into each time you go through a doorway. Our heroes turned the key in the lock – what would the first room be? 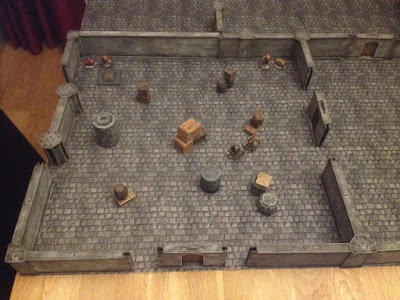 A storage room. After passing the pick lock test (auto pass due to the key) and stealth test, only four gnolls inhabited this room. Two fighters and two archers, they looked up in surprise as the warband burst in. 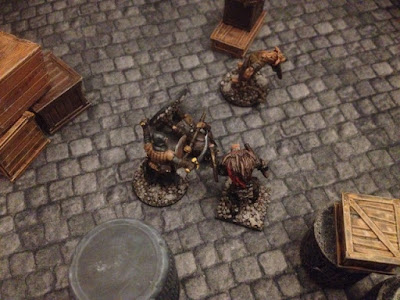 Group activating, Grey Leopard ordered his men to attack. Ulf and Annok soon dispatched one fighter, but the others were still standing. One was downed by a shot from Grey Leopard, but Ned the archer missed his quarry. Our heroes had to act fast, lest reinforcements piled into the next room, making it harder for them to advance. 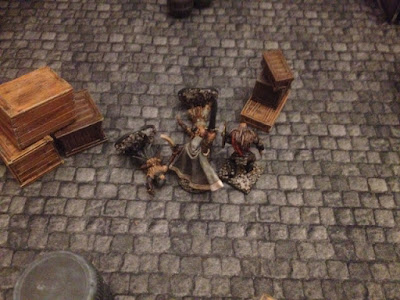 Another gnoll was attacked, but despite being outnumbered it managed to get the better of Ulf before succumbing to the onslaught. All the time the clock was ticking… 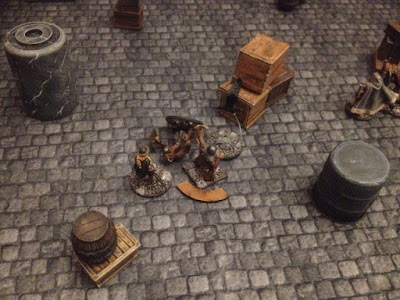 Ned the archer was also attacked and was wounded before Ungarra and Blackwing stepped up to defeat the evil gnoll. With the storeroom cleared of gnolls it was time to head through the door into the second room. What would our heroes find? 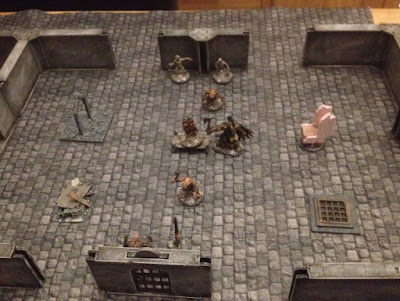 A torture chamber! Grey Leopard and his two men-at-arms stumbled through the door to discover a gruesome scene. On the far wall, two emaciated prisoners (I used ghoul models) were hanging in chains. In the centre, a surviving soldier was being tormented by a gnoll sergeant while two fighters looked up, gibbering encouragement. 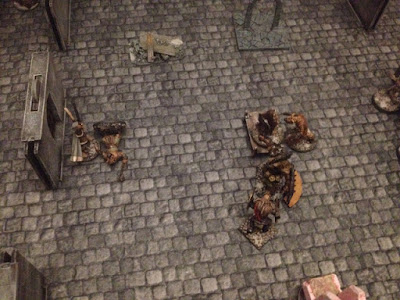 Luckily the element of surprise was still with our heroes. Grey Leopard shot and wounded a gnoll before it attacked him. He easily dispatched the creature as Annok ran to attack and wound the sergeant. In the meantime the unfortunate torture victim was forced to fight another gnoll barehanded. 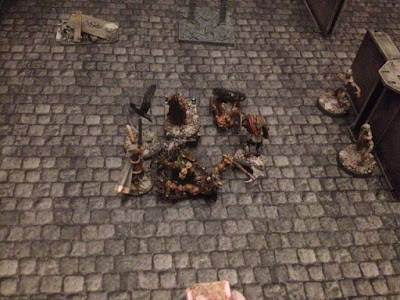 But where are the rest of the warband? The two rogues were doing what they do best; looting the gnolls’ treasure in the first room; while the others were making their way into the torture chamber as quickly as they could. Luckily Blackwing arrived just in the nick of time to help defeat the sergeant and it’s pal.

As everyone gathered in the now liberated torture chamber, a wounded Ned was left to release the two prisoners, while, grabbing one of the gnoll’s weapons, the rescued soldier joined the warband. Grey Leopard raced to the next door before the occupants could react to the noise of battle, bursting into… 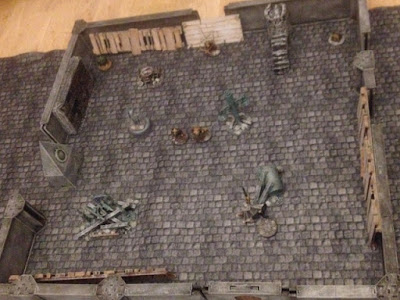 …an armoury! Once again the room was sparsely populated as the surviving gnolls remained oblivious to our heroes’ presence. However the three creatures in the armoury quickly attacked the lone ranger and his plucky avian sidekick Blackwing. 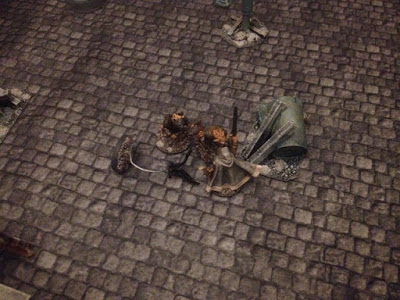 Grey Leopard shot at an advancing gnoll but missed, allowing it to launch it’s attack and bring Blackwing down. The ranger was forced to face the gnolls alone until his remaining band could get into the room. 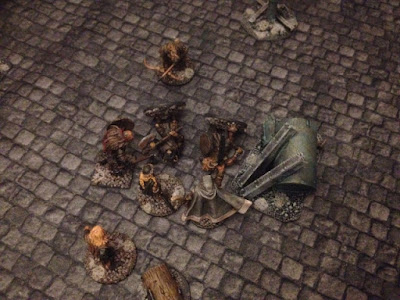 Luckily he managed just that, buying enough time for the others to pile in and launch a counterattack. Soon the armoury was filled with the sound of battle and the guttural howls of dying gnolls.

The final gnoll was easily dispatched, leaving the lower level of Tor Varden to our heroes. Ulf the swordsman quickly recovered from his injuries, but blackwing suffered a smashed beak. 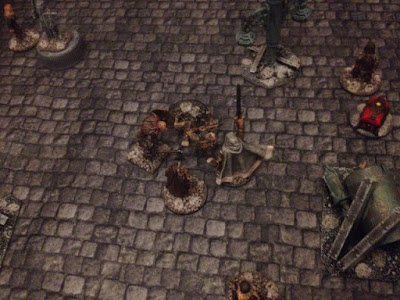 As the dust settled the room searched for clues. In addition to the gold and jewels looted from the storeroom, our heroes discovered a philtre of fairy dust and a hidden note, scrawled by the captain of the tower before he was dragged off to his doom. In it, he warned of a terrible danger, for leading this band of gnolls was none other than an evil Shadow Knight…