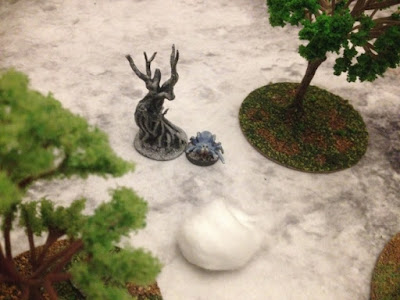 Pale wisps floated through the group as Grey Leopard led his companions through the trees. The tracks discovered by the adventurers had confirmed Grey Leopard’s worse fears: giant spiders were scuttling out of the darkness to infect the living, turning them into… something unholy…

Following the tracks into the forest brought the heroes to an area of woodland draped with cobwebs. Bloated cocoons littered the forest floor and gnarled and twisted trees, where the foul things made their nests, lurked in the shadows.

Grim faced he turned to his companions.

(Note: This is a playtest of the draft document of Rangers of Shadow Deep. Rules and scenarios in the finished publication may differ) 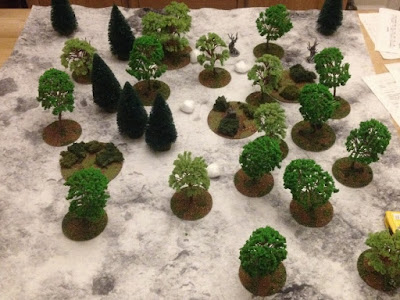 Despite not being well versed in ancient lore, Grey Leopard knew enough to find one nest tree and destroy it immediately (pre-game lore skill roll passed). Aided by Hunter he was also able to locate and kill one giant spider (pre-game tracking skill roll passed) and also discover a patch of Farlight Leaf growing nearby (pre-game survival skill roll passed). This gave him an extra +1 to his shooting stat, at the expense of other abilities. 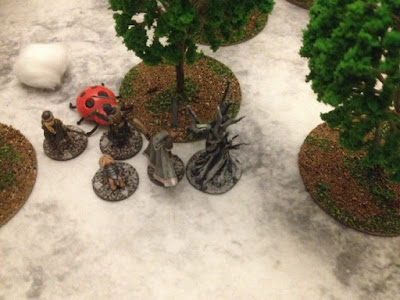 As the heroes moved cautiously through the woods, they came upon an evil spider (well, ladybird – I didn’t have enough spiders!) As they battled this creature, Grey Leopard stumbled upon a nest tree (random event card that happened to spawn one right next to him). Fumbling for his tinder box he immediately set it alight. 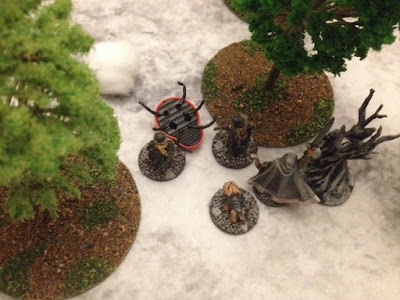 Spiders came skittering through the undergrowth at alarming speed, but the adventurers managed to fight them off. In the meantime the two rogues managed to creep along the spider-free left flank and towards the nest trees at the other side of the table. 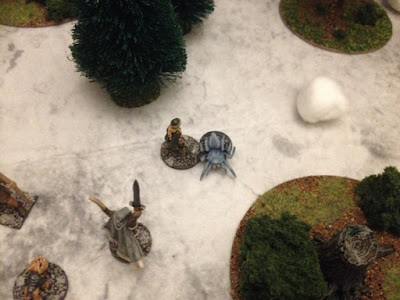 Pressing forward, Ungarra slew another spider and investigated a cocoon, finding it to contain the corpse of some poor individual. Grey Leopard did his best to cover his companions, but, as with the first scenario, he was missing every shot, despite the Farlight Leaf. 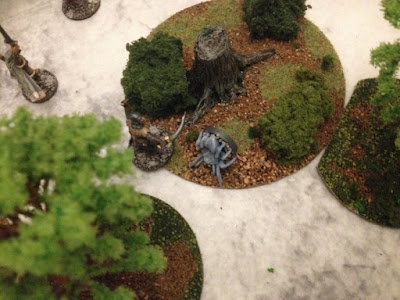 Ulf waded into the undergrowth to slay another spider, as more were emerging from the nest trees. Luckily, on the flank, Stabbs the rogue had reached one unmolested and quickly set fire to it. The others poked their swords through more cocoons, only to find more dead bodies. 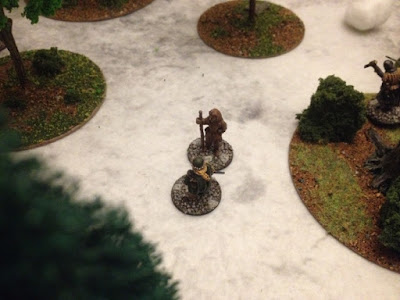 However Ungarra noticed something struggling among the cobwebs – a survivor! The swordswoman quickly cut the villager free and sent the grateful girl on her way. Meanwhile the rogues continued to set the nest trees alight while the others chopped up cocoons. 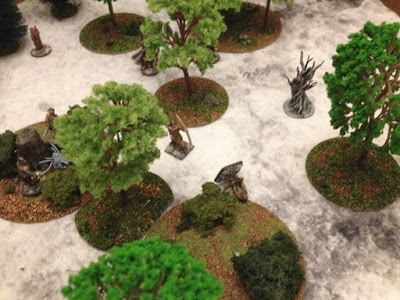 One cocoon however yielded a zombie! Ned the archer fired, but missed. Behind him, Grey Leopard drew his bow and concentrated. With Farlight Leaf coursing through is veins he fired… and hit! Finally a kill for the ranger! 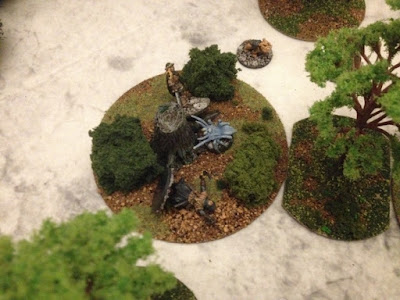 Ulf the swordsman was not so lucky: sluggish from a poisoned spider bite, he was too slow to react as a spider leapt from the undergrowth and tore a chunk out of his neck. A critical hit, which is not as critical as in Frostgrave, but still critical enough to down him! 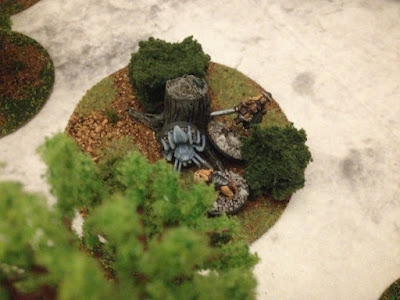 Hunter and Ungarra quickly ganged up on this final spider and tore it into a foul-smelling mess, finally clearing the area of the evil stain of infection.

Another fast, furious and fun game, made a little easier by the initial run of successful skill rolls and the lucky placing of a nest tree next to the Ranger. 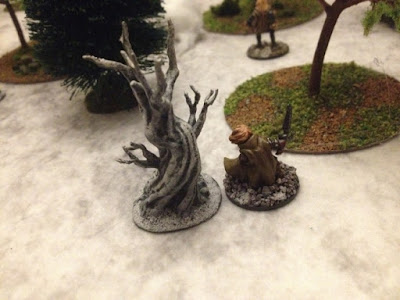 Over the two scenarios Grey Leopard earned enough experience to advance to level 2, gaining an extra ability (‘Focus’) and an improvement to one of his skills. He was also the proud owner of a Fishglass.

That concluded the first mission. It was obvious that the unpleasant things sneaking out of the Shadow Deep’s miasma were merely the vanguard of a wider invasion. Could the line be held, or would the kingdom fall to the greater evils about to be unleashed?