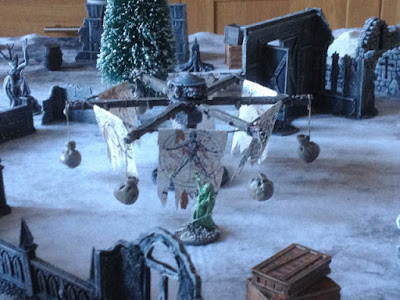 Oddleigh the apprentice peered through the ruins at the strange, slowly spinning contraption. He turned his head slightly to catch the muffled moans that emanated from it.

“It’s a bone wheel boy – part of an accursed ritual. I read about it in that damned book – why do you think it went on the fire?”

“A ritual? A ritual for what?”

“I didn’t read that far, but those poor fellows hanging off it must be rescued, or at least allowed a painless death.”

The Summoner was about his warband forward, when something screamed… 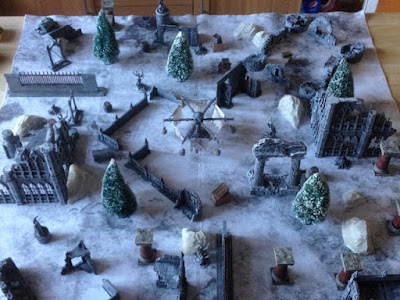 Back then for the penultimate scenario in the Thaw of the Lich Lord campaign. Giles brought his Sigilist Toddlebrew, complete with a fresh coat of paint snazzy new outfit and together we would try to rescue the unfortunate captives from the bone wheel (and filch whatever treasure they happen to be carrying), whilst dealing with the terrifying Banshees that guarded it. 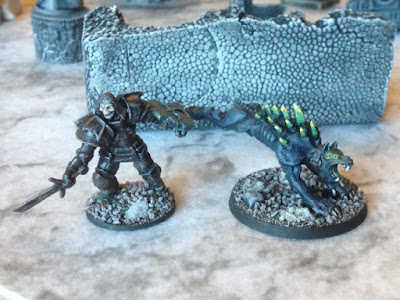 Thaddeus started off well, with his pre-game spells summoning a skeleton, upgraded to an armoured version and a minor demon with two attributes, giving it extra legs (+1 move) and magical attacks. 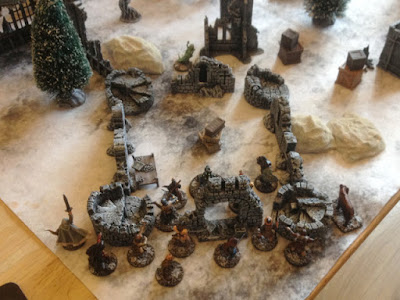 Thaddeus and his band approached warily from one corner and began to fan out. A wailing Banshee floated through the ruins, so Thaddeus’ magical demon was tasked with taking it down. 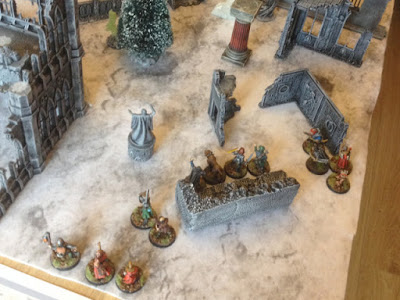 Toddlebrew’s and his mob arrived at the opposite corner. His crew were tooled up with enchantments and were ready to do battle with another Banshee. Winning the initiative, a magical arrow was fired and struck true, laying to rest the wailing creature. 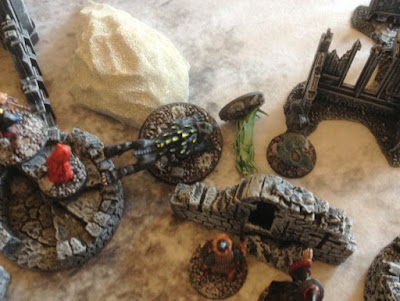 The other Banshee was likewise destroyed by Thaddeus’ magical demon, although it took a couple of rounds. With the threat dealt with, it was time to head towards the wheel. To make up the numbers, Oddleigh summoned an imp. 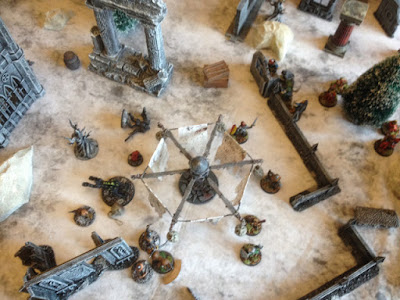 Both bands edged closer, skirmishing around the edges of the wheel but by and large using it to keep out of sight of the opposition. Thaddeus’ armoured skeleton was shot down – ah well, he could always raise another one! 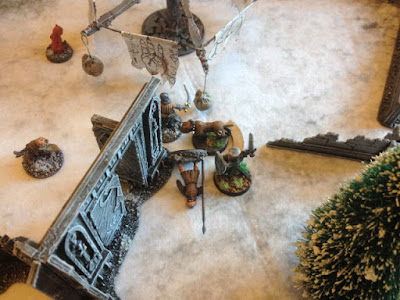 At the other side of the wheel, an infantryman was attacked and defeated by Toddlebrew’s green knight. In return one of Thaddeus’ treasure hunters slew the opposing warhound. 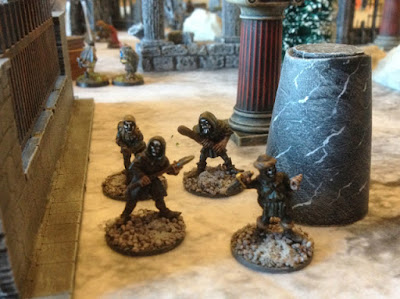 The poor victims are soon being pulled from the wheel as soon it span them into into reach, but the Lich Lord did not stand idle while his ritual was being spoiled. Four death cultists wandered onto the scene behind the Sigilist. 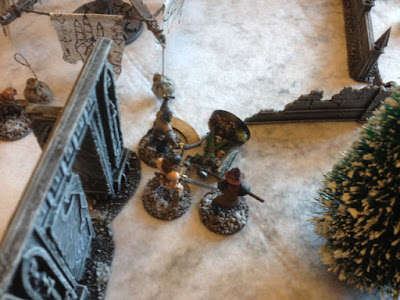 Meanwhile the green knight was ganged up on and slain, while Thaddeus spent most of his time leaping treasure carriers rescuers back to safety. On his left, the ranger and marksman had climbed amongst the ruins, trying to draw a bead on the enemy. 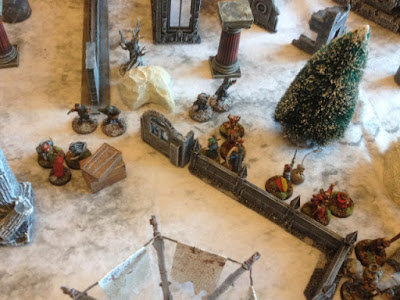 Both warbands had snagged three treasures each and were beginning to think about getting out of harm’s way. The opposition had formed a firing line in order to cover the withdrawal, but not only had to deal with the imp, but also the cultists coming up behind them. 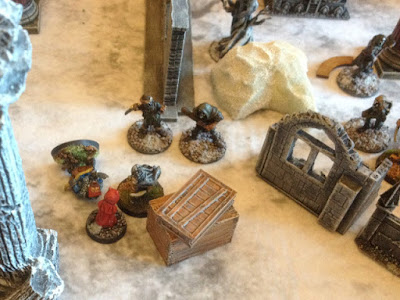 The imp, despite being outnumbered, took down an archer before being defeated by his comrade. On Thaddeus’ left, his marksman is flung into the air via a push spell, but luckily the fall, though damaging, isn’t fatal, meaning that he is soon healed by Oddleigh. 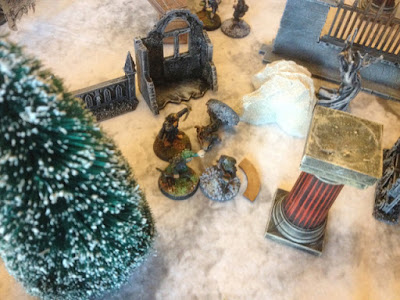 The cultists piled into Toddlebrew’s men, but they were quickly dispatched at the cost of a couple of dead or wounded archers. Thaddeus was shepherding his troops off the field with their rescued bundles, while Oddleigh, the ranger and marksman sniped from the left. 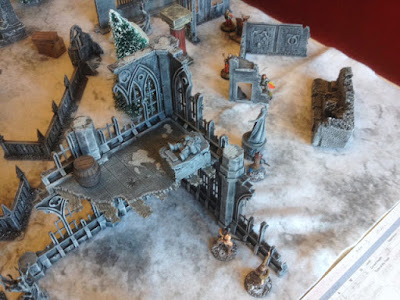 Meanwhile on Thaddeus’ right flank, a number of troops began to push forward, with the archer taking ineffective pot shots at the enemy captain. Fluffy the demonic warhound was already well ahead, waiting to pounce on any unwary treasure carrier as Toddlebrew’s men sought to escape. 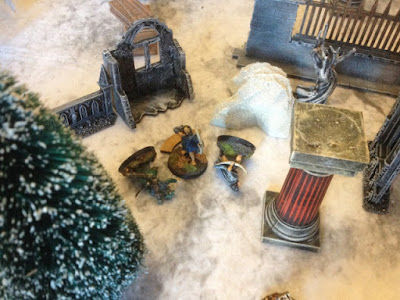 After surviving the cultists' onslaught, Toddlebrew's archers were rewarded with a well-aimed elemental ball from Oddleigh, which made a nice dent in the Sigilist's firing line 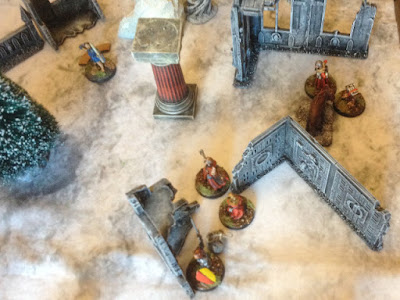 As the dregs of the Sigilist’s band withdrew, the warhound worked her way to their rear, and launched herself at the apprentice. Watching from the flank, Oddleigh risked a mind control spell and rolled high enough for it’s target, a wounded archer, to be unable to shake it off. 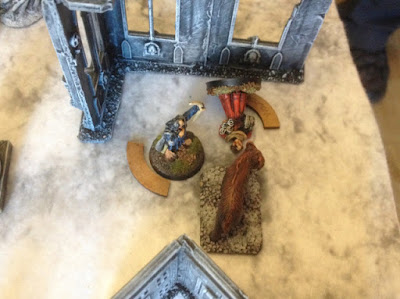 With the mind-controlled archer in support, Fluffy defeated the apprentice -  the last casualty in the game, as by now the majority of soldiers had left the field, leaving an empty bone wheel to spin uselessly in the fetid breeze. 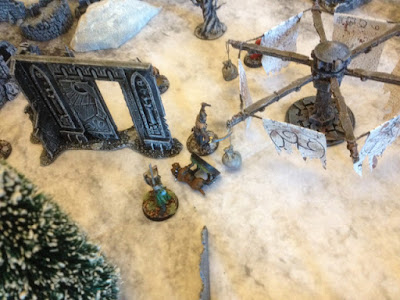 A great game - made easier by the early demise of both Banshees. Treasure-wise it was a draw with three each, but I pipped Giles to the post by way of casualties caused, including his apprentice, who, having had a close call, lost all of his expensive equipment.

Oddleigh waved as the three rescued captives bade a grateful farewell and limped back to civilization. He watched them as they disappeared into the gloom, half wishing that he could go with them.

He sighed before turning to walk back into the Cloven Hoof, only to find his master leaning in the doorway.

“You can go if you like,” he said. “You’ve more than earned the right to do so.”

“Oh, er… no, I-I’ll stay,” stammered the apprentice. “I signed a contract at the hiring fair and, well, this isn’t over yet is it?”

Thaddeus followed Oddleigh’s gaze to the blackening clouds that swirled maddeningly in the sky above them and shook his head.

“No, it’s not over, but the time has come for the final reckoning I suspect.” Suddenly his grim features broke into a huge grin. “But the good news is that I’ve finally found what I’ve been looking for.”