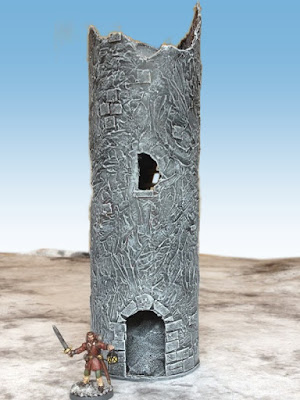 Deep in the heart of the frozen city stands the tower of the great wizard Pryn Gh'ool.

Among magical circles it is whispered that this mighty sorcerer once practiced the dark arts of null magic: anti-magic if you will. Indeed, it is said that even to this day, it is impossible to cast spells in the confines of what remains of this edifice.

This may or may not be true, but one thing is for certain - any wizard worth his or her salt would give his or her eye teeth to discover the secrets of Pryn Gh'ool... 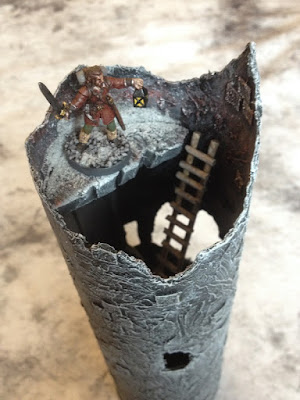 This is the first step towards making the terrain necessary for the 'Silent Tower' scenario, which calls for a tall tower, connected by walkways to two smaller towers (which I have yet to make).

The tower is made out of a Pringles tubes (other tube-bound overly-addictive potato snacks are available). After cutting off the top and gouging out some doorways, windows and holes, I added some 'stonework' by sticking on some small squares of double-sided tape. 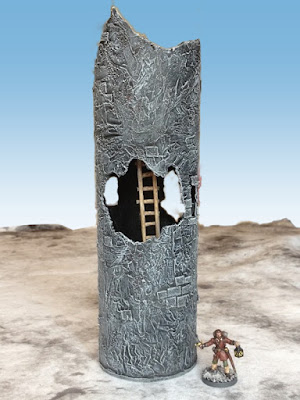 A smearing of 'No More Nails' glue added the texture, whilst some bits of foam were (somewhat clumsily) glued to the inside to give the impression of broken stairs and floors. A lump of foam was also stuck in the bottom, partly to help weigh it down. The ladder was simply some bamboo flower sticks stuck together.

More sinister than the Silent Tower, it is said, is the network of tunnels and chambers that run beneath it. Many allege that the great Pryn Gh'ool not only dabbled in null magic, but was also an accomplished beastcrafter. To this day, strange howls can be heard in the dark passages that riddle the hill upon which the Tower of Pryn Gh'ool stands... 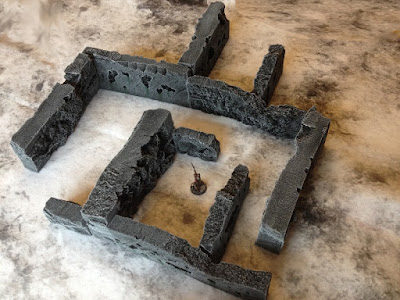 In readiness for the Breeding Pits expansion book (I've gone into the 'Gnicktarter' at level 2) I took a few spare chunks of grey packing foam to make some rocky dungeon walls.

A very quick and easy job, which began with tearing them into strips, picking out holes in the smooth sides, undercoating black and then drybrushing with tester pot paint. 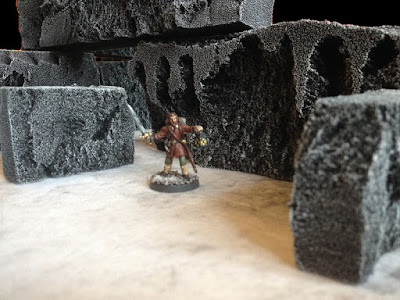 Coming soon, not one but two game reports (in which two original members of the Thaddeus' warband will die...)
Posted by JP at 19:11