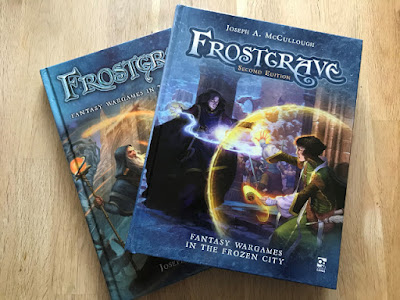 I hope you enjoyed my brief foray into Call of Cthulhu. I’m not sure if I’m going to add any more RPG content, as it’s turned out to be quite a pain copying and pasting from the Yog-Sothoth blogs (in fact I'm really not getting on with the new version of Blogger at all).

So, on to some much more relevant content – my copy of Frostgrave Second Edition has arrived!

The first thing you notice is that it’s chunkier than it’s predecessor, which bodes well.

The artwork is also just as great as the first edition, with artist ‘RU-MOR’ amply filling the shoes of Dmitry Burmak. It’s worth noting that the wizards and soldiers depicted are completely different to the one we’re used to seeing in the books so far – maybe we’ll see a new line of figures soon? (and they’ll be corkers, if the new apprentice figure that came with my order is anything to go by).

As you'd expect from the first edition, there is also more miniature goodness than you can shake a stick at, with Paul Cubbin joining Kevin Dallimore on paintbrush duty to produce some great, if envy-inducing, photos.

So, assuming you already have the first edition, what’s different in the second? 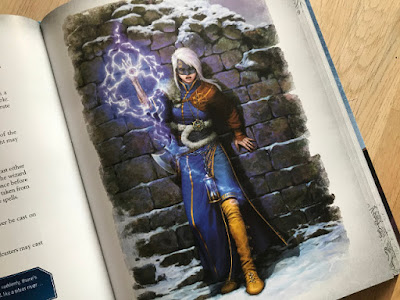 For starters, apprentices are now 100GC cheaper to hire, and have slightly better starting stats too.

Soldiers are split into two types: standard and specialist. Some standard soldiers are now free (yes, free!) while the cost of others differ from the previous book.

Some of the stats have been tweaked too and there’s a cap on the number of specialist soldiers you can hire.

Equipment-wise, having an extra dagger no longer gives you +1F, two-handed weapon takes up two item slots and ranged troops must forfeit a slot for their quiver. The armour stat of figures is also capped. 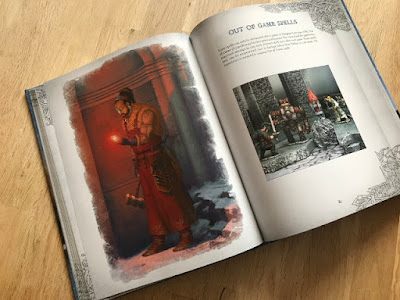 The rules for setting up the table have been tweaked slightly, especially treasure placement, h starts off with a central piece of loot, around which the other tokens are placed.

Deployment zones are also slightly different and there is advice on deploying at the corners.

There’s no change to the phases of the game (something I was expecting given the changes in Rangers of Shadowdeep) but there are other differences (some of which have already seen print in the Maze of Malcor supplement).

Group activation has been made a little clearer. All group-activated models must make their move action first, before performing their second action. it’s been a while since my last game but I’m not sure we ever adhered to that!

Interestingly, the total of any modifier is now capped to +10, and the bonus given to a figure by supporting models is also capped.

There are also a couple of new rules for swimming and making a run for it! 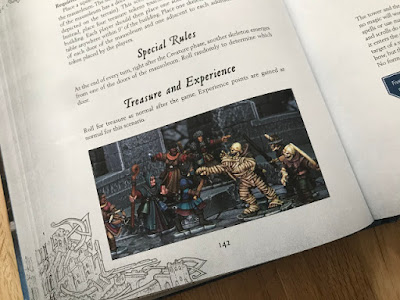 Many will be relieved to know that critical hits are no longer as critical, with the double damage been replaced by a less deadly modifier (though anyone on the receiving end of one might beg to differ).

Interestingly, not everyone gets the -1F modifier when they’re carrying treasure…

Let’s face it, we’re only here for the magic!

The amount of points you can empower a spell has been capped – no more boosting a spell so that it’s impossible to resist! There’s also a set casting roll minimum of 14, so, for example, casting Mind Control on an easy-to-resist 7 would be treated as a roll of 14.

Saying that, it is now possible to auto pass or fail a resistance roll on a natural 20 and 01 respectively.

There’s a new section about casting from scrolls, which tightens things up and brings the book in-line with the FAQ.

You’ve probably heard how some lesser-used spells have been removed from the second edition. These are: Create Grimoire, Forget Spell, Monstrous Form, Restore Life, Reveal Death, Reveal Invisible, and Willpower.

Oh, and the out-of-game spells now has a dedicated section in the campaign sequence. 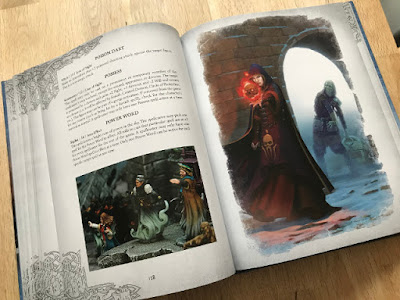 Once a game is over, there are some more tweaks and changes. The big news is that XP is capped to 300 max.

The XP table is also different, for example wizards can lo longer gain XP from killing opposing figures, but can gain a capped number of point if their warband kills and uncontrolled creature.

XP from collecting treasure is lower, and there’s n XP for casting spells below a certain casting number. However, wizards will gain XP simply for turning up and participating in the game and for failing to cast spells and suffering damage as a result - the most painful lessons often being the most effective!

Speaking of pain, badly wounded spellcasters will be pleased to learn that they now get a more generous discount from their apothecary. Should the worst happen, the formula for hiring a new apprentice has changed ever-so-slightly, as have the rules to promote them to wizard status if their master is killed.

Any player left in possession of the field no longer claims all remaining treasure, but has to roll to see if they get them.

To my mind the treasure table is a little less generous, but the black-market rules from the Maze of Malcor have been included to help you get your hands on some tasty gubbins.

The potions table is now in line with the changes announced in the Dark Alchemy supplement (thus releasing all those demons trapped in bottles) and the weapons/armour and magic items tables (both tweaked slightly) now have a selling value column. Obviously, the spell table has been changed to reflect the changes to available spells.

Some of the bases have also been altered slightly (also reflecting the changes to the spells in some cases) and the base resources have been tweaked too. 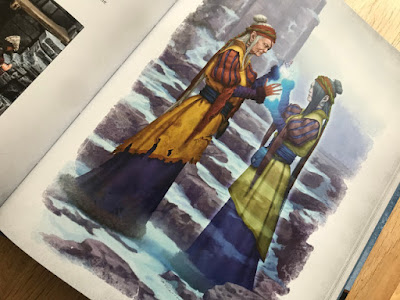 To make the aspiring treasure-seeker’s life more interesting, the rules for handling uncontrolled creatures has been changed to include those with ranged weapons.

Also, while there are no new creatures in the bestiary, they now come with varying traits. These traits are then listed at the end of the bestiary for ease of reference.

Oh, did I forget to mention that random monsters now show up on a 10 or more?

The good news is that the 10 original, well-loved, classic scenarios are all still included, albeit tweaked slightly in some instances.

The even better news is that there are 10 brand new ones too!

Helpfully each scenario now comes with a handy list of requirements, so you’ll know what you need before embarking on your next adventure.

But don’t despair if you feel your wizard is falling behind somewhat, for the mechanism for fielding more experienced wizards published in the Maze of Malcor is also included in the second edition. 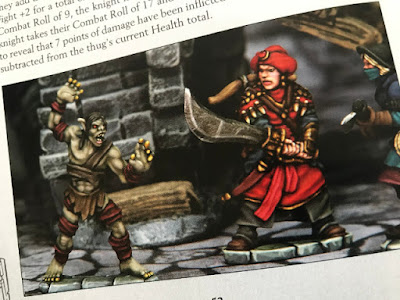 You’ve got your spells and your wizard sheet, just like before, but now you’ve also got a handy quick reference guide printed at the very back of the book!

There’s also a section about how the changes in the second edition impact all the supplements that have been published.

The good news is that they are impacted very little! When changes are made, this section covers what, if anything, you need to do.

The only Frostgrave product that has been rendered obsolete is the Spellbook (though, to be honest, I hardly ever use the spell cards I bought).

Do you need to buy the second edition? No. If you and your group are happy playing the first edition, like you have been for the last five years, then there’s no need to-

What am I saying? Of course you need to buy the second edition!

Apart from being a work of art, it factors in and addresses all of the changes, suggestions, criticisms and feedback that this brilliant game has generated since the first edition was published.

Certain mechanisms have been balanced, certain spells de-clawed and certain wrongs righted. I think it’s great that Joe has looked at all the issues and produced a second edition that is still recognisable as the game we know and love whilst still supporting pretty much all the other Frostgrave products we’ve spent our hard-earned cash on. 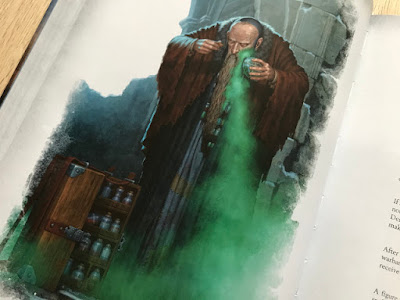 Email ThisBlogThis!Share to TwitterShare to FacebookShare to Pinterest
Labels: Waffle