At Long Last, a Game! 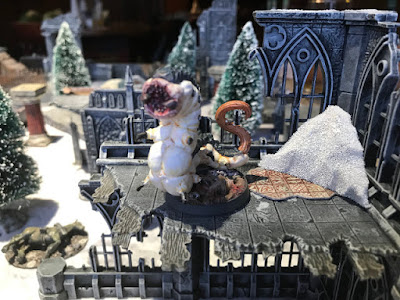 I was contacted, via the Hereford Wargames Club website, by someone looking to get back into wargaming. It turns out Brendan is a friend of a friend from the Herefordshire Boardgamers Club, and we arranged to meet up at the Swan pub, where I could introduce him to the joys of Frostgrave. 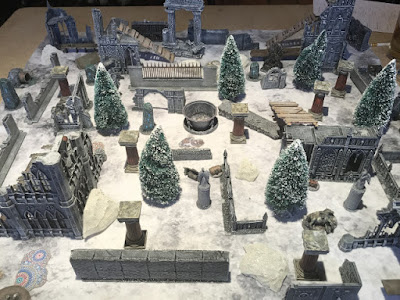 After knocking up an entry-level  Witch warband for Brendan (to suit the shaman vibe of his Massive Darkness Orks) and a Sigilist warband for me (a magic school I haven’t played before), I decided upon the Worm Hunt scenario from the main source book (saving me from lugging any specialist scenery around). 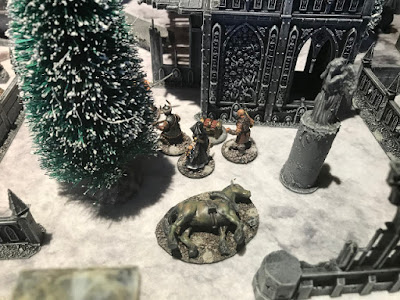 With the table duly laid, we began, both splitting our warbands into groups and edging them forward while I explained the rules. My wizard, Sister Sans Serif, took the right flank and headed to the nearest treasure marker. She was accompanied by a couple of bodyguards while a barbarian warrior (actually an illusory soldier) scouted ahead and an archer took up position on a ruin. 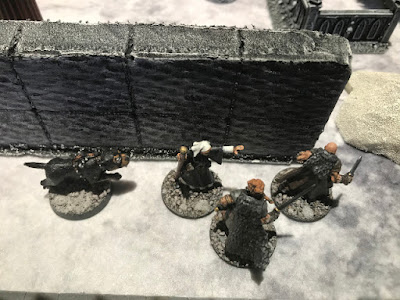 In the centre-left, her apprentice directed the rest of the warband, including another archer to climb up a ruin (accompanied by a thug to grab the treasure nearby) on the left flank and a warhound to probe ahead. 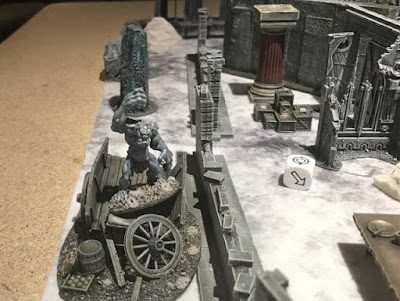 Both warbands grabbed treasure and fluffed spells (as level zero wizards are wont to do). The kerfuffle attracted the attention of a wandering snow troll, who appeared on my left flank and started to head towards my warband. 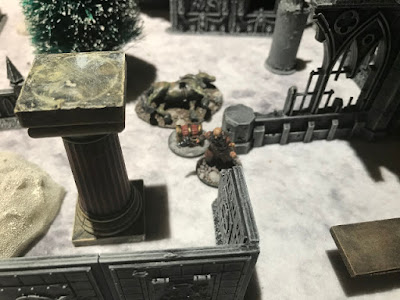 The truth behind my ‘barbarian’ was soon revealed after an arrow from an Orcish archer dissipated the illusion, but at least he acted as a shield for one of the thugs, allowing him to pick up a treasure. 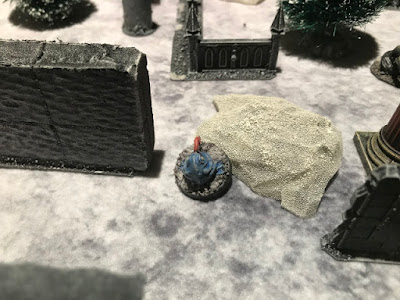 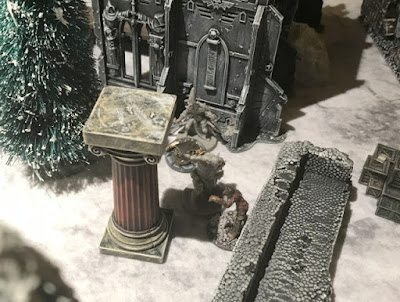 The Orc shaman had used it’s evil magic to summon a zombie at the start of the game. Luckily for me, my Sigilist possessed the control undead spell. Soon the zombie was working for me! As the Orcs worked towards my wizard, the zombie turned on them. 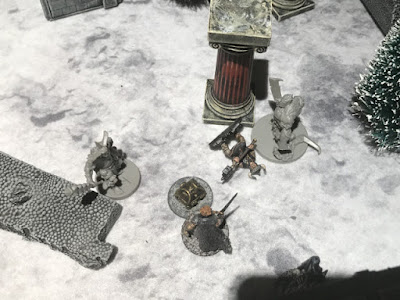 In the centre, warriors clashed over a treasure token. Fighting around this golden chest would last on and off throughout the game as it was picked up, dropped and fought over. 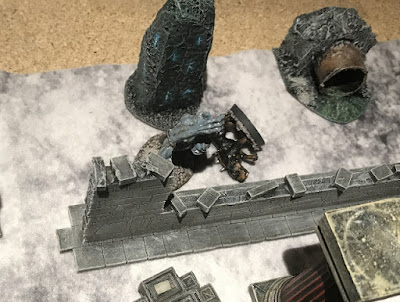 With the snow troll looming closer, I sent my warhound up the left flank to draw the creature away. The poor doggie paid for this move with it’s life, but the troll was now more likely to attack the Orcs than my warband. 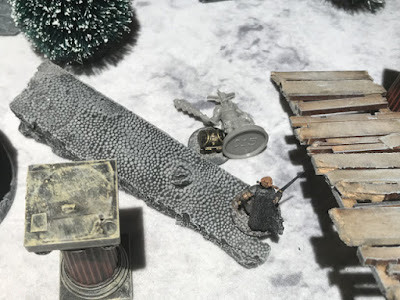 By now most of the treasure had been claimed. We had both lost a sizeable number of soldiers, either from combat or from being shot at by archers. Offensive spells also flew around the table, with curses and poison darts being slung from the Orcs, while my Sigilists lobbed magical grenades via wizard eyes. 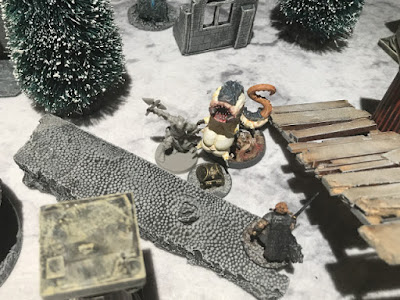 Eventually only two treasures were left and it was growing increasingly likely that the giant worm would erupt – but near which one? Turns out it slithered out of the ground next to the much-fought-over central treasure. 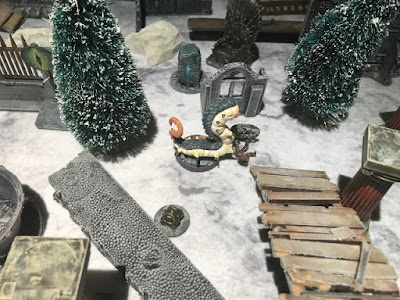 As the snow troll lumered towards the Orcs on one flank, the turncoat zombie on the other had managed to chew it’s way through some of the Orcish band and was now free to shamble forward to distract the giant worm. Would this allow me to sneak forward and grab the golden chest? 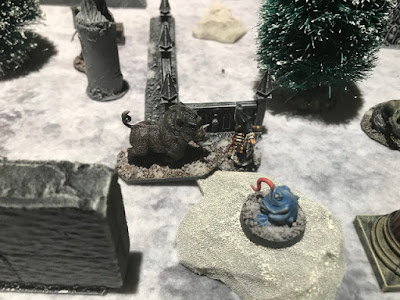 My treasure hunter took the chance and grabbed it. However behind him, this attracted the attention of a wild boar. Unfortunately the first person the beast saw was my Sigilist, who, with wizard eye successfully cast, was heading back towards some cover. 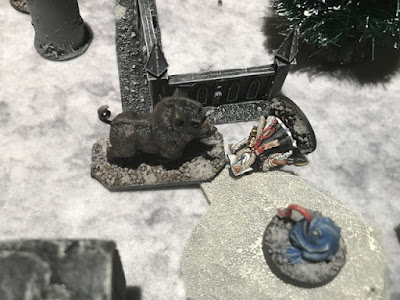 Tusks lowered, the board charged and Sister Sans Serif fell! I allowed this to happen purely to highlight to Brendan the necessity of keeping one’s wizard alive and the tactical disadvantage of losing the wizard phase *cough*. 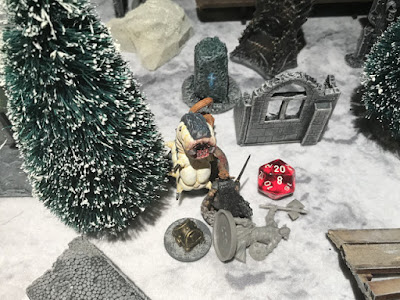 With honours reasonably even regarding treasure, we decided that the winner of the game would be whoever killed the giant worm. Both my treasure hunter and Brendan’s thug piled in, only for the Orc to get critted. 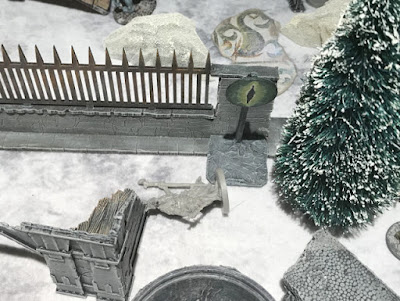 My apprentice evened up the score by lobbing a grenade through her wizard eye towards the Orc shaman. Landing squarely into his lap the thing went off, leaving nothing but a nasty green mess. It was now up to the trainee wizards to finish off the job! 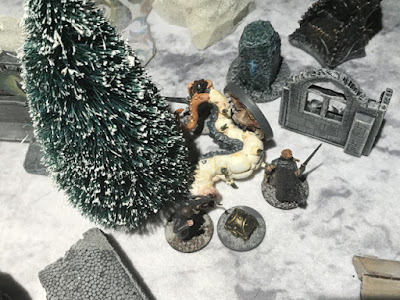 For the Orc apprentice however, things were initially looking dire, menaced on one side by a snow troll and a giant worm on the other. Fortunately he managed to escape their clutches and the worm turned on my treasure hunter. Assisted by an archer but hindered by another raised zombie (a very fresh one as I couldn’t be bothered to search for another zombie figure), the brave warrior drew his sword and, despite being poisoned and carrying loot, slew the beast!

We had a really fun game very a very high body count! It was great to be gaming again, and Brendan enjoyed it too. No doubt there will be more expeditions into the frozen city in the near(ish) future.
Posted by JP at 12:27