Aeon Flixx and the Henge of Hell 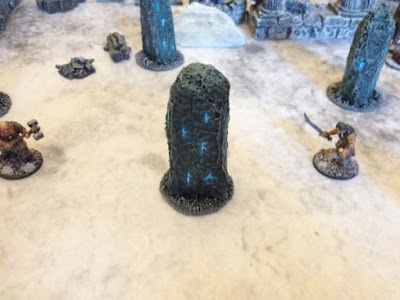 Aeon Flixx, Chronomancer, peered through a gap in the rubble, crouching low as yet another group of barbarian warriors sauntered down the ancient alleyway. Waiting until the coast was clear, she beckoned the others.

Brunhilde squatted awkwardly beside her, the apprentice’s large frame unsuited to such stealth. “More of them?”

Aeon nodded. “I’m afraid so dear. They’re definitely up to something.”

“Then we should follow them!” Brunhilde, as up for the challenge as ever, began to crawl forward.

Aeon sighed – her apprentice was much too keen for her liking. “Yes, yes I suppose we should…” She rose stiffly to her feet. “If the old maps are correct, there’s an ancient stone circle further on ahead. You can bet your life that’s where they’re heading. C’mon.”

She let her captain Grey Leopard  take the lead while the others followed. They were a motley bunch, she mused – thieves, thugs and archers in the main. She had read unsettling things about the stone circle, and the strange bones her archaeologist colleagues had dug up there in the future – would her warband have what it takes to face whatever lurked among the stones?

“Only time will tell,” she muttered. “It always does…” 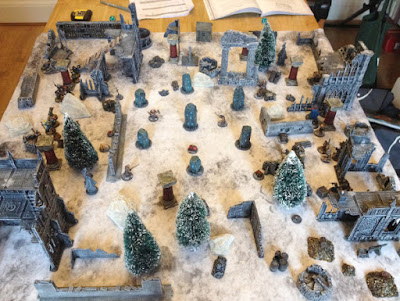 On to the second and final game of last week’s session and the next part of the second scenario from Forgotten Pacts: Mortal Shells. The table was rejigged, with a circle of mystical standing stones in the centre. Crackling with arcane energy, the runes inscribed on these stones would have to be read by the spellcasters (well, three of them, including the central one, at least). To complicate matters, a pair each of barbarian berserkers and treasure hunters lurked in and around the circle. 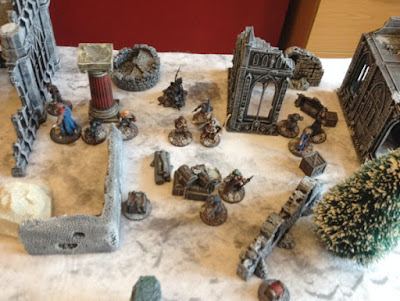 After the treasures were placed (3 each plus any Revealed Secrets and Fool’s Gold) Aeon Flixx’s band deployed on one table edge and won the initiative. Cautiously they moved forward with the demon hunter taking the lead to attack a nearby barbarian and free up the treasure he was guarding. 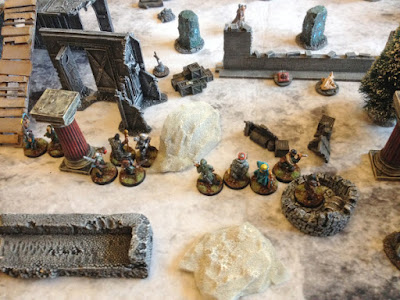 On the opposite side of the table, Illusionist Shazzam! appeared with his bunch of reprobates. Likewise they advanced; a nice line of treasure lying invitingly before them. Both wizards were keen to clear the table of barbarians so that they, or their apprentices, could get into the centre and read those runes. 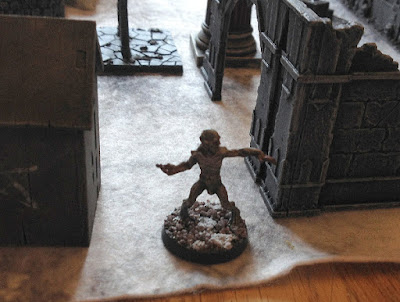 The general kerfuffle attracted a hungry ghoul on the right flank. Thankfully this undead creature didn’t have much of a sense of direction and spent most of the game wandering around the shadowy edges of the board. 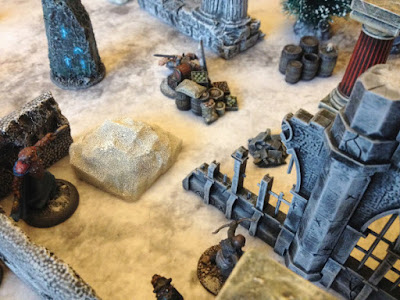 Brunhilde and one of the archers shot down another barbarian, clearing the way for them to move up towards the stone circle. For her part, Aeon had cast Time Store, giving herself a handy extra action for future use. 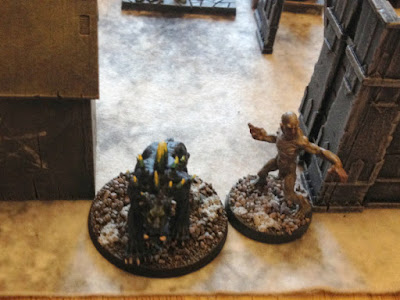 More treasure was taken, bringing forth a demonic Bile Hound on the right hand side of the table. Sniffing around for victims, this creature had a terrible acidic bite, which if successful would reduce it’s victim’s armour. Best avoided! 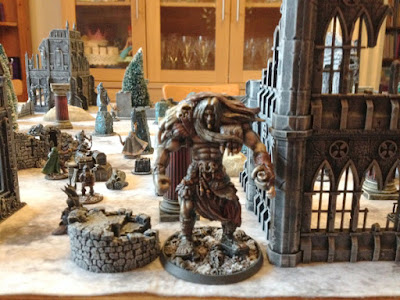 But worse was to come in the form of a terrible frost giant! This massive brute lumbered onto the field right behind Aeon’s warband and turned it’s shaggy head to the nearest morsel – Brunhilde the apprentice! 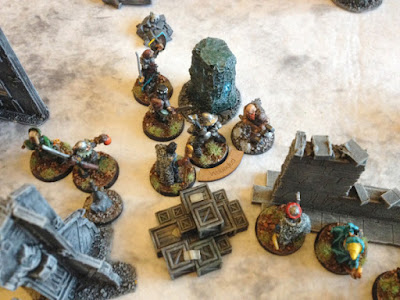 Meanwhile Shazzam’s team were advancing to the edge of the circle, engaging the nearest barbarian. Despite going in mob-handed, the warrior was able to inflict a wound on their templar. 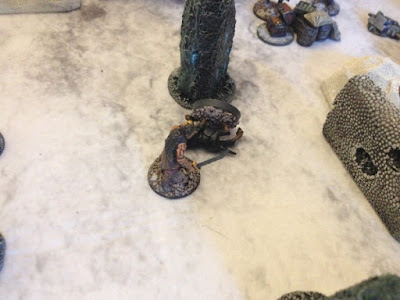 Aeon’s warhound decided to get a piece of the action and launched itself at a barbarian treasure hunter. The warrior was too quick however, and skewers the dog instead. 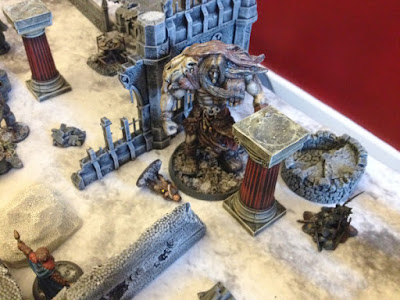 Brunhilde orderd a thief to get in between her and the giant. He reluctantly did so, resulting in what was probably the most uneven round of combat in Frostgrave history. Needless to say the end result was a flattened thief within a giant-sized footprint. 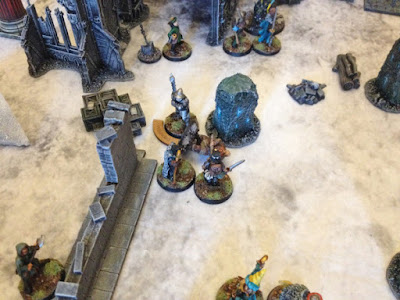 Shazzam’s band continued to take on the barbarians and seize treasure, enabling the Illusionist to read some of the mystical runes on the standing stones. Each stone yielded 50 XP (2 stones max) while the central one gave 75 XP, so a whopping total of 175 XP was available. 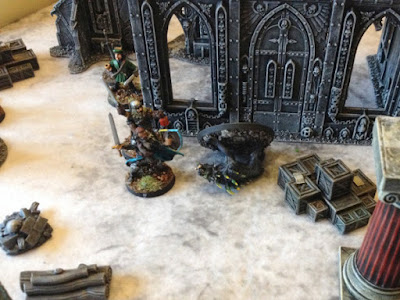 Other members of the Illusionist’s warband took on the Bile Hound, which had wandered into line of sight. Luckily for them, the captain was able to kill the beast before it’s bite to eat away at his armour. 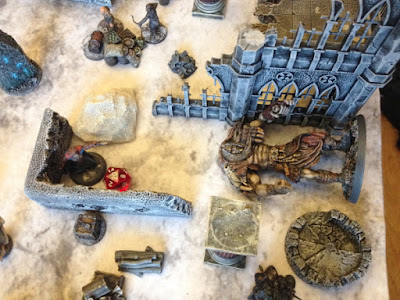 With the thief dead, Brunhilde prepared to face the giant by hurriedly conjuring up an Elemental Bolt. Succeeding, she launched it at the monster and I rolled… a 20! I kid you not. But was it enough? +8 shoot + 20 dice roll - 15 giant’s armour = 13 damage. Double this due to critical hit = 26. Minus 25 giant’s health = a kill with 1 point to spare! Phew! 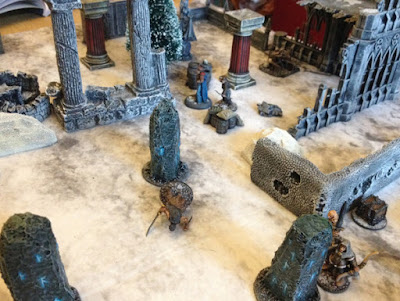 Grey Leopard the captain was also successful, shooting the barbarian treasure hunter that had killed the warhound. By now Aeon had also managed to read some runes, using her Time Store extra action to get to the stone, read the runes and then get behind some cover. 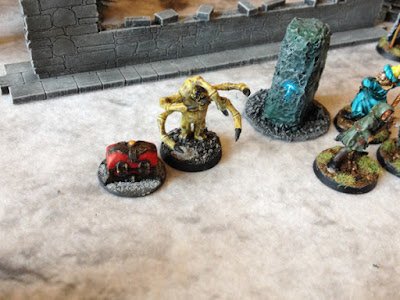 But what was this? Throughout the game we had been rolling for each surviving barbarian to see if the power of the stones changed them. By now the only barbarian left was one under Shazzam’s Mind Control. Suddenly the berserker’s body twisted and convulsed, changing into something horrible… 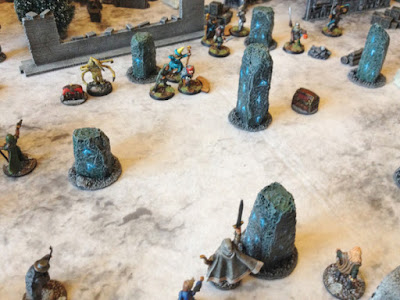 He had changed into a demonic Chilopendra! In the scenario there are no rules regarding what happens to mutated barbarians under a spellcaster’s control, so we rolled another will test. The creature passed, allowing the Illusionist to temporarily add the demon to his roster. Looking on aghast, Aeon’s band began shooting at this unholy alliance. 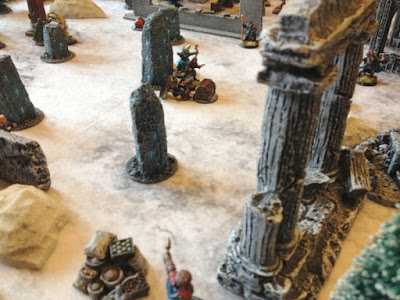 Brunhilde also began to shoot, blasting one of her opponents with an Elemental Bolt, despite the dampening effect the stone circle had on magic. This cleared the way for her to also move to the stones and read the runes. 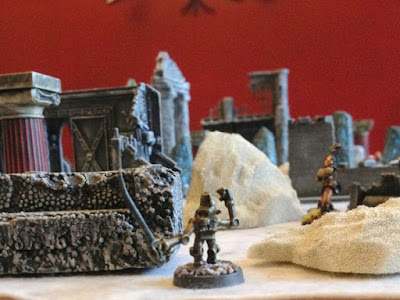 More treasure was picked up and a small construct in the shape of a clockwork monkey clanked and clattered onto the field behind Shazzam’s warband. 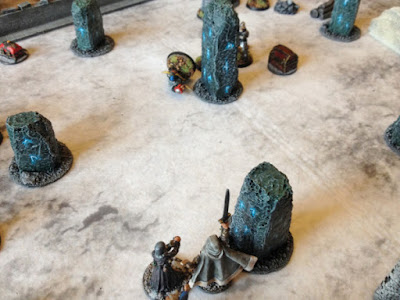 With all the barbarians either dead or mutated, it was time for the Chronomancer’s band to move forward. Grey Leopard shot an enemy ranger as he advanced. 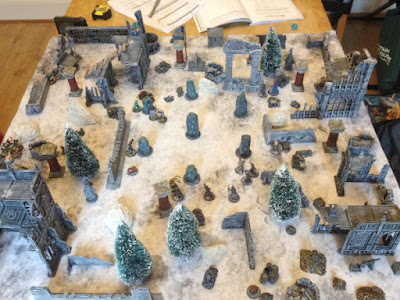 Both sides had picked up treasure and for once Aeon could foresee and equal share coming to her. For his part Shazzam, having read all the runes he needed, was beginning to pull his forces back. 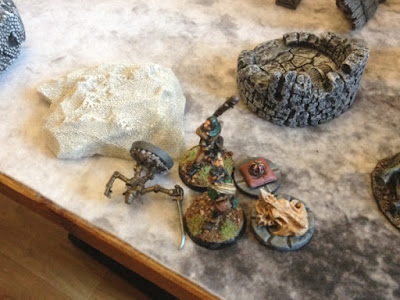 Clearing the way for this withdrawal, the Illusionist’s men spanked the monkey (sorry). Aeon now felt comfortable enough to read the runes on the central pillar, thus also finishing her studies. Meanwhile Brunhilde cast Control Undead on the still wandering ghoul, just in case an extra pair of hands was needed. 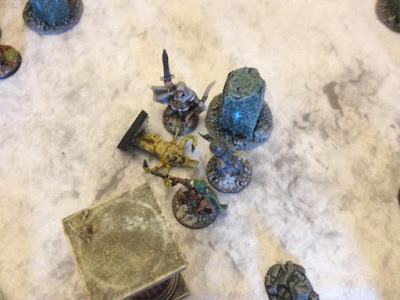 Demon, hunter, captain and thug all ganged up on the Chilopendra, which had advanced into combat but was unable to use it’s horned charge bonus (which necessitated move and combat actions in a single turn). The demon was swiftly banished, thanks to the magic weapons that the soldiers carried. 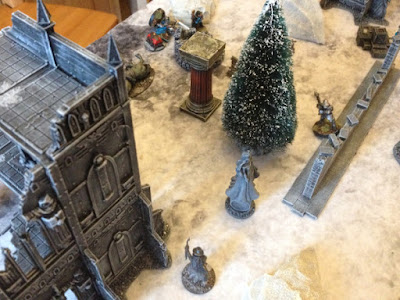 With the field clear of perils, Aeon’s warband pursued Shazzam’s retreating men as much as they could. As the curtain fell, an archer fired a last-minute shot, cutting down an opponent.

And so the game finished with both wizards reading the required runes and claiming four treasures apiece. However I won on points, having dispatched more barbarians and the Chilopendra. It was a great game once again, made easier perhaps by the fact that we dealt with most of the barbarians before they could mutate into demons. Thankfully my treasure rolls were much better this time, allowing me to tool up the warband for the coming confrontation…

Aeon grinned as her soldiers admired the glittering sheen on their new magical weapons.
“Look at them – like kids at Wintertide…”
Brunhilde grunted. “Huh, baubles and trinkets!” She casually tossed one of her battle-wands, catching it by the handle mid-air. “Give me a decent bolt any time.”
“Indeed,” chuckled Aeon. “I saw what you did to that giant.” She raised her glass in a toast. “Bravo to you dearie.”
She pulled the recently-looted grimoire off the table and began to read. “Let’s hope your luck will hold out for next time. I suspect we’ll need it…”
Posted by JP at 11:14