The task of replacing the now broken Photobucket links on the blog continues.
In posts with small picture counts I will try uploading them straight into Blogger and see how long that lasts.
Posts with larger photo counts, such as battle reports, would take much longer to do this, so I’m trying out Google Slides as an alternative method of presenting them.
Therefore, most of the old battle reports will still have the same text, but instead of having photos of the action interspersed between them, there will be a slideshow at the top of the post – this will hopefully save me a lot of work!

And now, on to some proper blogging… 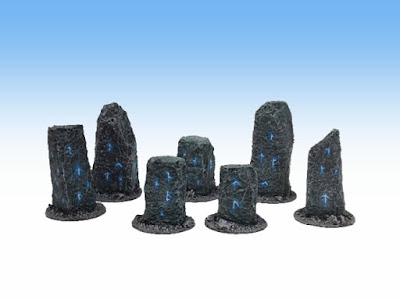 Many Frostgrave scenarios call for magical pillars, mystic monoliths or runic stones, not least the new Ulterior Motives pack, so I thought I’d cobble some together. 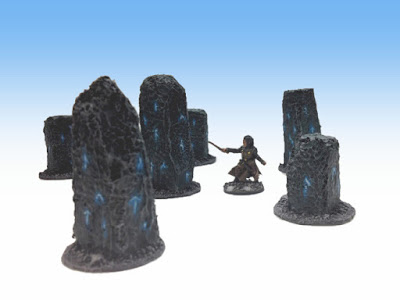 Following my experiment with No More Nails glue and EPE packing foam, which I used as a starting point for a Dwarven sarcophagus, I hacked some more pieces of foam into standing stone shapes and smeared the glue over them. 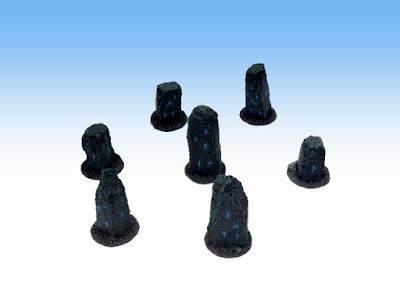 Once this has dried I glued them to circular plasticard bases, which I textured. A quick spray of Halford’s black primer later and they were ready to paint! I went for a greenish look for the stones, drybrushed with grey as they were looking a bit too green. 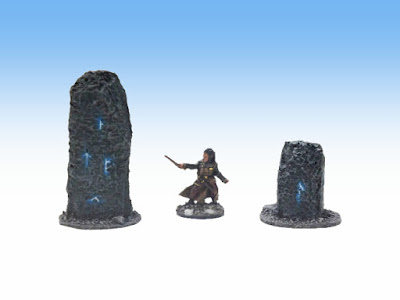 I then attempted to paint glowing turquoise runes on them. I’m not convinced I did a particularly good job on the runes, but they don’t look too bad at a distance.

Anyway, it’s another hole in my terrain requirements filled, and proves that EPE foam will take NMN glue, which can be sprayed with car primer, giving me more options for terrain building!
Posted by JP at 09:57

Email ThisBlogThis!Share to TwitterShare to FacebookShare to Pinterest
Labels: Scenery and Scatter, Waffle